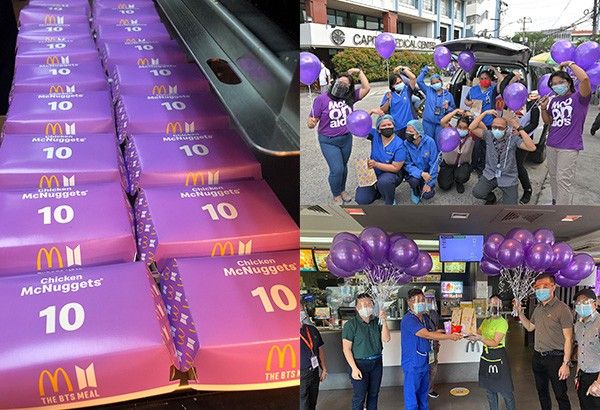 MANILA, Philippines — A popular treat for the most popular people right now. The much-anticipated BTS Meal was first served hot and fresh to over 2,000 medical frontliners two days before it will be available in the country today.

It was first launched on May 26 in the United States with different roll-out dates in different countries and markets where McDonald's is located.

In the Philippines, the BTS-inspired meal with the purple packaging and logo were served across hospitals and vaccination hubs last June 16 through the McDonald's Kindness Kitchen, an initiative of the Ronald McDonald House Charities.

“Our medical frontliners have been working tirelessly to keep everyone safe throughout the pandemic. We hope that this simple surprise for our medical frontliners, will give some encouragement and cheer, reminding them that we [McDonald’s] are here to support them as they continue to fight COVID-19 every day, protecting and keeping us safe,” said McDonald’s Philippines President & Chief Executive Officer Kenneth Yang.

A FoodPanda rider then became viral for posting a photo of him while on his way to deliver the BTS Meal deliveries. He said that the meal is in high demand on the food delivery service app now, and that he is happy to deliver it to BTS fans. He even encouraged the fans to order.

The Army proved yet again its clout on social media. After allegedly causing some McDonald's stores in Jakarta and several other cities in Indonesia to temporarily close due to the deluge of orders of BTS meals, the fandom has now put up a crowd fundraising drive to help Gojek drivers.

The amount raised will be donated to Gojek drivers. Gojek is an Indonesian on-demand multi-service platform. "Gojek" was coined from the Indonesian word "ojek" that means motorbike taxis.

Apart from donating to the crowdfunding effort, several Indonesian Army members went viral for giving generous tips to their Gojek drivers for delivering their BTS Meal.

On Wednesday, June 10, AFP reported that several McDonald's outlets in the capital Jakarta and other cities were temporarily shut down over virus fears due to frenzied buying from fans.

"We temporarily closed four of six McDonald's stores here in Semarang for a couple of days," said Fajar Purwoto, the city's public order agency head. "I don't want Semarang to be in the Covid-19 red zone again." — Reports from Charlie Mae Perez

RELATED: Review: BTS Meal in the Philippines: Is it worth it?