Covid rise in NCR to peak in 2 weeks 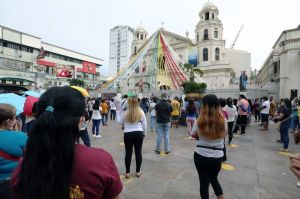 Devotees of the Black Nazarene attend the Holy Mass in front of Quiapo Church, Plaza Miranda in Manila City on the first Friday (July 1, 2022) of the month. They observed the safe physical distance while attending the mass. (PNA photo by Joey O. Razon)

THE rise in the number of Covid-19 cases in the National Capital Region (NCR) and surrounding regions is expected to peak within the next one to two weeks, the independent monitoring group OCTA Research said on Monday.

OCTA said the current increase in Covid-19 cases has exceeded projections, with infections going above the 1,000 mark for the fourth straight day.

The NCR or Metro Manila still has the highest number of cases as of July 3 with 663, with 142 cases in Quezon City alone. Cavite, Iloilo, Laguna, Rizal and Cebu all recorded more than 50 cases.

An increase in positivity rate was also recorded in Batangas, Benguet, Iloilo and Pampanga.

David attributed the slight increases to the Omicron subvariants BA. 4 and BA. 5.

He said these subvariants are also responsible for the increase in cases and positivity rate in Western Visayas.

David expects a slight increase in the hospitalization rate in Metro Manila as well as in Calabarzon (Cavite, Laguna, Batangas, Rizal and Quezon).

“But, so far, it's coming out to be a mini-surge just as we had projected a few weeks back. It is not at the same level as we had in January or last year, but we are still having a close watch on the numbers to see if it will change in trajectory,” he said.

Last week, OCTA projected a slowdown in the increase, but David said that projection has been revised.

“There is still a 50-percent growth rate so we will definitely see a further increase in cases for this week or maybe by next week and an increase in positivity rate, but it will not be past 10 percent,” he said.

Once the peak in cases is reached in one to two weeks, the numbers will start to drop, he said.

Once the peak hits, the alert level will “definitely be re-evaluated.”

“And then, of course, there are other things to think about such as the exit strategy, exiting out of the pandemic, if the state of emergency will no longer be renewed after September, there will be further discussions on how to move forward with the pandemic,” David said.