‘Covid spike no cause for alarm’ 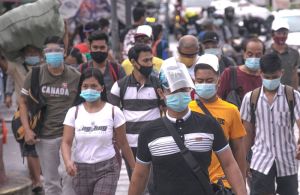 (UPDATE) DESPITE an increase in the number of Covid-19 cases in the National Capital Region (NCR or Metro Manila), there is no need to be alarmed yet as the hospital utilization rate remained at low risk, independent tracker OCTA Research said.

In a public briefing on government-run PTV 4 on Tuesday, OCTA senior research fellow Dr. Guido David said they are not projecting any increase in the hospitalization rate despite the seven-day average in the number of cases increasing to 225 cases per day from June 14 to 20 and the positivity rate increasing to 4 percent.

“At this time, nananatiling mababa naman ang health care utilization natin, 22 percent, so hindi pa naman tumataas, so safe pa rin ang hospitals natin at hindi natin kailangan matakot at maalarma (Our health care utilization remained low at 22 percent, so it is not increasing, therefore, our hospitals remain safe and we should not get scared or be alarmed),” David added.

He reminded the public to be vigilant and continue to follow health protocols as the reproduction number had increased to 2.05, meaning that a person infected with Covid-19 may infect up to 2 persons in a given day.

David said the current “wave” of infections is different from the previous Omicron surge last January or the Delta surge in August last year.

Based on their models, he added, the NCR may experience around 500 to 1,000 cases by the end of June or early July, which by then could reach the average daily attack rate to around seven cases per 100,000 population.

When asked whether he would recommend a possible escalation of the alert level status because of the case increase, David said any possible increase in Alert Level status will be up to the Department of Health and the Inter-Agency Task Force for the Management of Emerging Infectious Diseases to decide.

Aside from the NCR, other areas that were flagged by OCTA include the nearby provinces of Cavite, Rizal and Laguna, as well as the province of Benguet and the Western Visayas Region, but David said it would be just a matter of time before other provinces experience an increase.

On Monday, the Department of Health said there was an 82 percent increase in cases from the week of June 6 to 12, with an average daily caseload of 436 cases per day.

Meanwhile, the Philippine Red Cross (PRC) has urged the public to get tested for early detection and prevention of Covid-19 cases.

PRC Chairman and Chief Executive Officer Richard Gordon called for people to get vaccinated or get their booster shots for added protection against the virus.

He said the PRC is prepared for a possible surge in cases by making its 14 molecular laboratories, as well as its 17 Bakuna Buses, 26 Bakuna Centers and 24 Bakuna teams, available to local government units to help in the government's vaccination program.