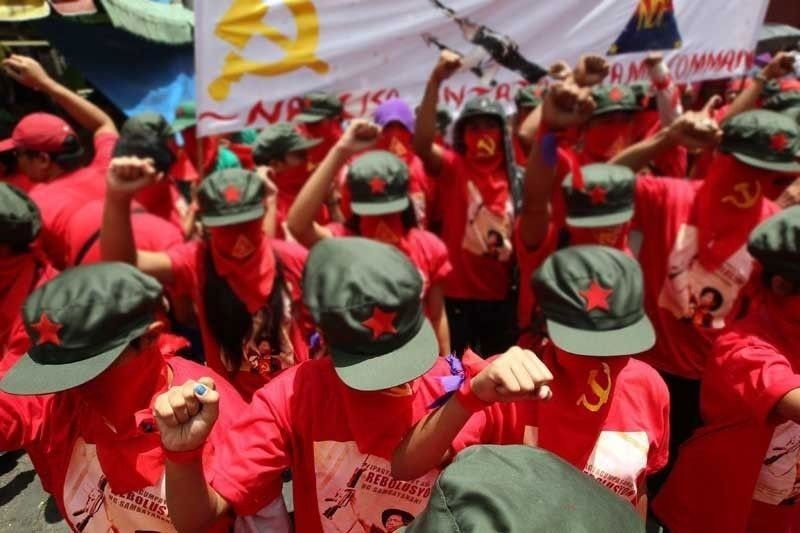 New People’s Army fighters are shown in this undated photo.

BAGUIO CITY, Philippines — The Communist Party of the Phiilppines on Sunday said will not seek delisting as a terrorist group under the Anti-Terrorism Act saying it does not recognize the legal authority of the Philippine government.

The CPP issued the statement in response to the Anti-Terrorism Council's resolution to designate it and the New People's Army as terrorist organizations. The council said it found probable cause that the CPP-NPA has committed or has conspired to commit terrorist acts defined in the Anti-Terrorism Act.

RELATED: CPP warns of ‘heightened suppression’ after being designated as terrorists

"The Party, the New People's Army and the revolutionary movement are outside the legal jurisdiction of the [Government of the Republic of the Philippines],” Marco Valbuena, spokesman of the CPP Central Committee said, adding that the CPP does not recognize "the juridical authority of the GRP, neither does (it) recognize the Anti-Terror Law as a legitimate law."

The CPP said it is under the jurisdiction of "the People’s Democratic Government that the revolutionary movement is building and has established in the course of waging a revolutionary war to advance the national and democratic rights of the people."

Valbuena said that at least 30 petitioners have already questioned the constitutionality of the anti-terror law before the Supreme Court, which is scheduled to hold oral arguments in January.

READ:Cheat sheet on the looming legal battle on the anti-terrorism law

He said that legal experts and luminaries might take independent action to question the ATC's designation of the CPP and NPA because this might be seen as a first step to prevent the legal consequences on civil and political rights in the country.

In early December, a Department of Justice official said the guidelines on how a group or person tagged by the ATC can appeal for delisting. Under the Implementing Rules and Regulations of the Anti-Terrorism Act, those designated as suspected terrorists may file a verified request for delisting with the ATC within 15 days of publication of the lists.

The appeal may be filed more than once, but if denied, the next request can only be done six months later.

"We hope to submit the rules for the ATC’s consideration within the month," Justice Undersecretary Adrian Sugay told Philstar.com on December 1.

Designation of CPP-NPA can be used against legal groups

National Security Adviser Hermogenes Esperon Jr. said in a report by The STAR that the designation could be used against groups like the Makabayan bloc of party-list groups that government has been linking to the communist rebels.

"We want to complete the actions by legal means through the courts. Yes, they can expect more cases," Esperon said.

READ:Bayan: Why is the burden on us to prove we're not a rebel front?

The CPP maintained that the Anti-Terrorism Act is an "anti-democratic" law passed to suppress opposition to the government. It said the law "is…using the veil of 'anti-terrorism' to suppress and clamp down on patriotic and democratic forces and delegitimize their mass-oriented cause." — The STAR/Artemio Dumlao