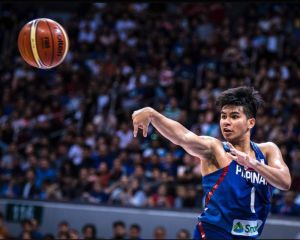 LESS than a year before the Philippines co-hosts the FIBA World Cup, our basketball officials are wrangling over the exodus of elite Filipino players to leagues overseas.

The problem is a serious distraction to preparations for the event, although the officials have assured that it will not affect efforts to assemble the best team to represent the Philippines.

In the spotlight is the refusal of the Samahang Basketbol ng Pilipinas (SBP) to allow William Navarro from joining the Seoul Thunders in the Korean Basketball League. The SBP claims the 25-year-old's contract with the Gilas national team runs until March next year.

Navarro has no choice but to put his transfer on hold.

But other players were not as acquiescent. Kai Sotto, who plays for the Adelaide 36ers in the Australian professional basketball league, came out with the most stinging pushback, describing the SBP decision as “crazy.”

“This has to stop,” wrote Sotto in his social media accounts. “You got players who've been working hard and dreaming to play basketball at the highest level they can reach and we got our own people stopping us from achieving our greatness.”

The seven-foot-three's rant was seconded by a fellow seven-footer, Greg Slaughter, who accused the Philippine Basketball Association (PBA) of denying him the chance to play in the Japan B.League.

Slaughter said the PBA's recent meeting with officials from the Japanese league to discuss player transfers was “total BS and crab mentality at its highest.”

He said he played in the PBA for seven years and has always made himself available to the national team.

Filipino basketball stars playing in pro leagues abroad was unheard of until the Japan B.League allowed Asian “imports.” The Philippines, with its deep pool of basketball talent, became the natural hunting ground for recruitment.

Kiefer Ravena became the first Filipino to play in the B.League. Even back then, Ravena had to go through a gauntlet before his team in the PBA let him go.

To date there are 21 Filipino talents playing in basketball leagues in Japan, Australia, South Korea and Taiwan.

The PBA feels the “poaching” has to stop. Last week, league officials went to Tokyo to raise their concern with the B.League.

PBA chairman Ricky Vargas put it bluntly: “Recent events whereby our players accepted offers to play in Japan have hurt not only our league but our national team training and development, as well. If we continue this way of engaging Philippine players without prior clearance from our league, it may sadly blemish our friendship.”

The poaching does not only affect the PBA but collegiate basketball as well, SBP president Al Panlilio told a Senate hearing.

But Ateneo coach Tab Baldwin said he respects his players' decision to leave. “What is my role as Ateneo head coach? My role is an educator…to help my players achieve their full potential so they can go out and get the best jobs for themselves that they want,” Baldwin said.

Over the past two years, the PBA has lost some of its marquee players to the B.League.

But the league must by now accept the fact that player transfers are a natural occurrence; not even the NBA is immune to it.

And the SBP must realize that having Filipinos playing in leagues abroad means their talent and skills are finally being recognized beyond our shores.

A player in the national pool, on the other hand, must commit to suiting up for Gilas when the call-up comes, and must see to it that his contract with a league abroad reflects that commitment.

The differences have to be ironed out soon. The goal is to give an impressive showing at the FIBA World Cup. We cannot afford to lose focus.