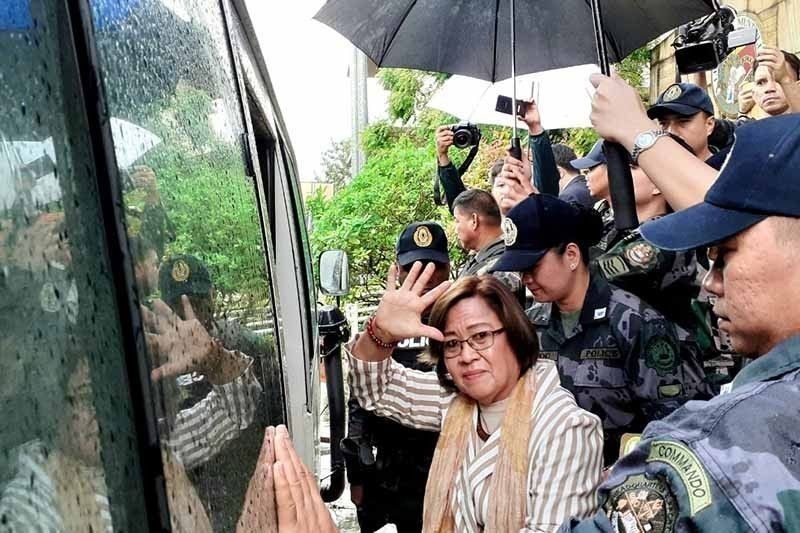 Opposition Sen. Leila de Lima in front of her supporters and members of the media earlier August 9, 2019 at the continuation of her trial at the Muntinlupa Regional Trial Court Branch 205.

MANILA, Philippines — Sen. Leila De Lima moved for the dismissal of the second in the three drug cases she is facing, again challenging the sufficiency of evidence against her.

De Lima, through her lawyer on Friday, filed a Demurrer to Evidence before the Muntinlupa Regional Trial Court Branch 205 where she is facing a conspiracy to commit drug trading with her former aide Ronnie Dayan as her co-accused.

The same branch is handling a separate drug case, with Jad Dera as her co-accused. Dera was earlier tagged as De Lima’s nephew, but claimed he is working as police asset. She filed a separate demurrer — a challenge to the prosecution’s evidence that, when granted, will lead to charge dismissal — on this case on Thursday.

De Lima’s lawyer argued that records of the case show that the prosecution’s witnesses “failed to adduce sufficient proof that will ‘sustain a judgment of conviction beyond reasonable doubt.’”

“Consequently, in addressing the most integral issue facing the Honorable Court: is the evidence of guilt presented by the Prosecution against Accused De Lima capable of sustaining a judgment of conviction beyond reasonable doubt? It is as simple as the answer to it is clear: IT IS NOT,” they added.

In this specific case, De Lima is charged for allegedly receiving P5 million on Nov. 24, 2012 and another P5 million on Dec. 15, 2012, from New Bilibid Prison inmates involved in illegal drug trading. The money alleged came from inmates that was received by former Bureau of Corrections chief Rafael Ragos and later handed to Dayan.

Ragos was earlier tagged as accused in the case, but the prosecution moved to drop him after he executed a supplemental affidavit detailing sources of money he supposedly delivered to De Lima, then justice chief, in 2012.

“Any alleged conspiracy to commit illegal drug trading. By dropping Ragos as co-accused, they allowed him to take the stand and deny any personal knowledge about the source and purpose of the funds, thus severing any link between the Accused and the inmates, who also testified that they had no personal knowledge of either the source of the funds or fact of delivery since they had no relation or interactions with Accused De Lima,” the pleading read.

Her lawyer also said that witnesses’ testimonies are proof of Ragos’ guilt for illegally soliciting and receiving money from various sources — from inmates for the “special requests,” “ang paw” for additional visitors and “tara” — while he was serving BuCor chief.

“These four whole years might not have been a waste of the State’s time, if it had charged the correct offense and had not made a bargain with the devil and ropped Ragos as an accused,” they said.

“As it turns out, it seems that all roads lead to Ragos; all evidence, whatever there is on record, tends to prove that Ragos was indeed ‘dirty’ and abused his authority as OIC of the BuCor and, therefore, could not be considered as a credible and disinterested witness,” the pleading further read.

De Lima’s team said their demurrer to evidence “highlights the absolute failure of the prosecution to present any evidence to establish the guilt of herein Accused.”

“As such, the court is duty bound to grant the same and to dismiss the charge against Accused De Lima, allowing her to finally be freed from further trouble, expense and anxiety of presenting evidence to prove her innocence. To put it succinctly, the Honorable Court and the Accused must be spared from this travesty of justice,” they added.