DENR: Demolition of fishing structures in Cavite to benefit fisherfolk

DENR: Demolition of fishing structures in Cavite to benefit fisherfolk 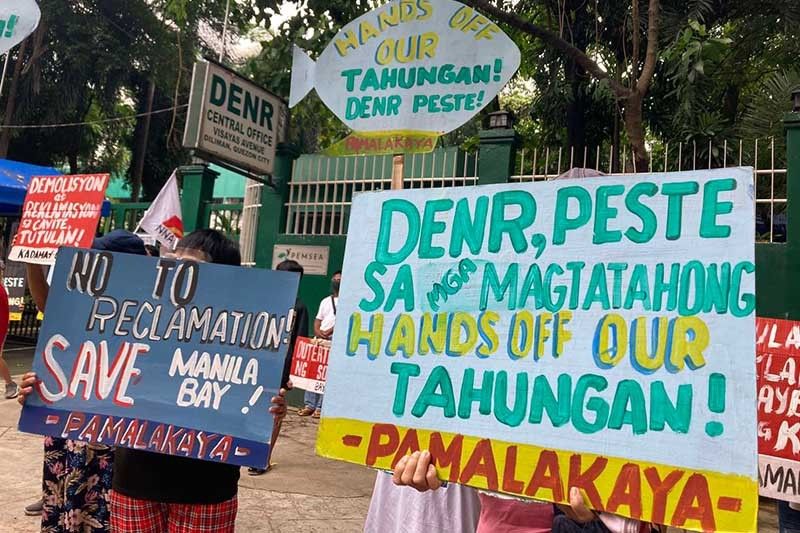 MANILA, Philippines — The Department of Environment and Natural Resources on Wednesday defended the planned demolition of "illegal" structures in Manila Bay after fisherfolk protested the move.

In a briefing, DENR Undersecretary Benny Antiporda claimed the planned dismantling of fishing structures in the waters of Cavite—which is feared to threaten the livelihood of 15,000 fishers and coastal residents who are engaged in mussel and oyster aquaculture—will actually benefit small-scale fisherfolk.

He said fishers would no longer have to venture farther into the sea once "illegal" fish cages, fish pens and baklad are removed.

“The first ones who will benefit from that are small fisherfolk, those who use small boats. Would you imagine once we dismantle illegal structures within one kilometer or few hundred meters from the shoreline, they can fish easily,” Antiporda said partly in Filipino.

The demolition, which did not push through as scheduled on Tuesday, is part of the department’s efforts to regulate fishing structures along Manila Bay and its tributaries after bamboo poles from fish pens and fish cages in Cavite were washed ashore following heavy monsoon rains in July.

But fishers believe the dismantling activities are a prelude to a massive reclamation plan in Cavite.

Antiporda also said the mussel and oyster farmers in Cavite have nothing to worry about as long as they are operating legally.

"The Supreme Court mandamus allows mussel farms to operate. The court is even encouraging to grow more shellfish in Manila Bay," he said.

The DENR Calabarzon earlier said that the Bureau of Fisheries and Aquatic Resources has been tapped to provide technical assistance to tahungan operators with permits for them to shift to long-line method, which is said to be a more environment-friendly way of growing shellfish.

In response, fishers’ group PAMALAKAYA said the purpose of the two dialogues that occurred in Bacoor City “was to inform, not consult the public about the plan to dismantle what the DENR calls illegal fishing structures in four coastal towns in Cavite.”

"And that includes tahungan, fish cages and saprahan owned by small fisherfolk," it said.

According to the DENR, there are 271 “illegal” structures in Cavite City, 97 in Kawit and two in Noveleta for dismantling.

Environment officials were scheduled to meet with local government units and other agencies to discuss the schedule for the demolition activity. — Gaea Katreena Cabico