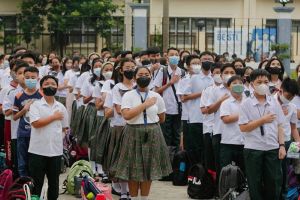 THE Department of Education (DepEd) breached its 28.6 million enrollment target on Tuesday, August 23, after 28.79 million learners were recorded to have enlisted for the school year 2022-2023 for a 104.49-percent increase from last year's 27.56 million.

This came a day after the first day of face-to-face classes and the last day of the regular registration period on Monday as the DepEd has been expecting a number of learners to still show up in schools with the intent to enroll and attend classes.

Of the 28.79 million learners enrolled in public and private schools and state and local universities and colleges (SUCs/LUCs) offering basic education, 24.66 million students signed up during the regular registration period from July 25 to August 22, and 4.12 million students during the early list-up held from March to April this year.

“There might be duplicates between early registration and quick counts. However, the system will detect it at the beginning of the school year,” the DepEd said.

Region 4A (Calabarzon) reported the most number of students with 3.94 million, followed by Region 3 (Central Luzon) with 2.97 million and the National Capital Region (NCR or Metro Manila) with 2.76 million.

DepEd spokesman Michael Poa said in a press briefing on Monday that public schools will accept late enrollees until September, provided that the learners will be able to attend at least 80 percent of the school days set by the department.

He urged parents to register their children as soon as possible, if they have not done it yet, to help schools prepare their facilities and resource1s for the accommodation of more students for the school year.

Poa said the reopening of in-person classes did not have any major issues, based on reports from DepEd regional directors.

“To echo our Vice President and [Education] Secretary [Sara Duterte-Carpio]'s message, when we say we are ready for classes, we are not saying there will be no problems, we expect many challenges but as Filipinos, we will be resilient. We will overcome. We will not break,” he added.