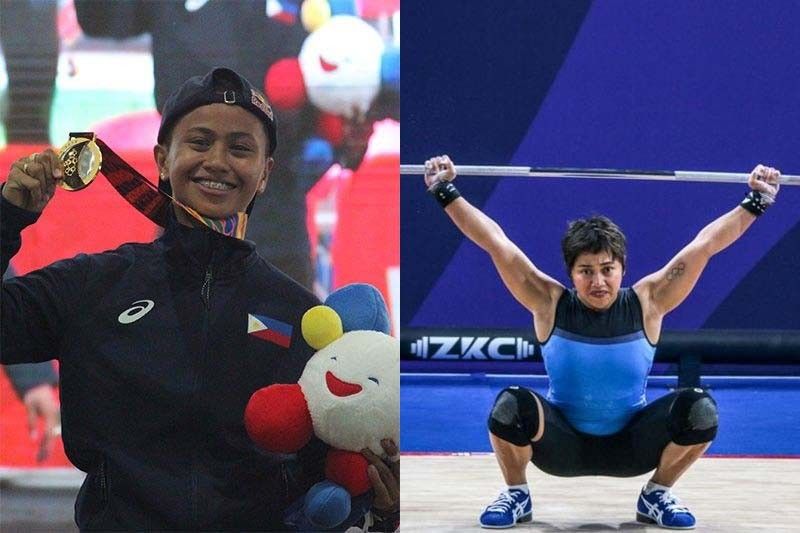 MANILA, Philippines – As it stands, Irish Magno is the only Filipina qualified for the delayed Tokyo Olympics later this year.

But girl power is set to take over with more than a handful of female Philippine athletes close to clinching a spot in the quadrennial games.

Headlining the list is 2016 Rio Olympics silver medalist Hidilyn Diaz. The weightlifter is hoping to a possibly last bid for an Olympic gold medal with a qualification to 2021.

The 29-year-old will officially qualify for her fourth Olympics when she participates in the Asian Weightlifting Championships in Uzbekistan in March.

Diaz does not need to win nor have a podium finish in the tournament to qualify, as she currently ranks second in the world for the women's 55kg category.

The top eight athletes in the world for each of the weight classes qualify for the Olympics provided that they have participated in at least six International Weightlifting Federation-sanctioned tournaments.

Her participation in Uzbekistan will mark her sixth tournament and therefore qualifies her for a slot in the quadrennial games.

Didal, who recently got nominated for Skateboarder of the Year in the 2020 Asia Skateboarding Awards, is virtually qualified for the Summer Games if she maintains her 14th spot in the world rankings.

The Asian Games and Southeast Asian Games gold medalist is hoping to become the Philippines' bet in skateboarding's debut in the Olympics.

Didal clinched double-gold in the sport's debut in the SEA Games last year.

Another Filipina expected to make the cut is pug Nesthy Petecio.

The Filipina boxer had hoped to qualify for the Olympics in March 2020 but was derailed after losing to Japanese foe Sena Irie.

Petecio hopes to make the country proud in her second try for a spot in the Games when she participates in the world Olympic qualifiers in June, a month away from the Summer Games.

The 28-year-old was one win away from an outright berth before her loss in March.

She hopes to join fellow boxer Magno in the Philippine contingent come the qualifiers.

Karateka Junna Tsukii, for her part, will need to make one final push to rise up in the world rankings in order to book her place in the quadrennial event.

Currently 10th in the world rankings, Tsukii will need to be the top Asian in the Female Kumite-50kg list.

There are four other Asians in the top 10 but Tsukii will only need to worry about two — China's Ranran Li and Iran's Sara Bahmanyar.

This is because two of the Asians in the Top 10 are from Japan who already have one automatic slot as hosts.

If Tsukii manages to overtake both Li and Bahmanyar, the Filipina-Japanese Karateka will be able to represent flag and country in the sport's biggest stage.

Golfer Yuka Saso is also looking to add another accolade to her list of achievements with an Olympic berth.

Now ranked 21st in the official reallocation reserve list for women, Saso will only need to climb to the Top 15 by the qualification period by June 28 this year to net an automatic ticket to the Games.

Saso is set to gain more in the rankings once the JLPGA resumes its integrated 2020-21 seasons by March.

These Filipinas are set to add to the Philippine contingent of boxers Magno, Eumir Marcial, gymnast Carlos Yulo, and pole vaulter EJ Obiena.