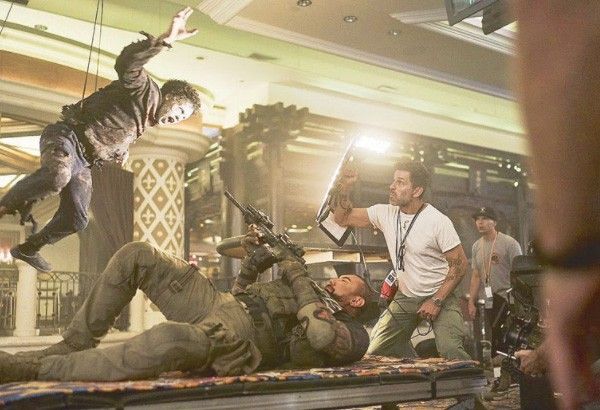 MANILA, Philippines — Did you know that “Army of the Dead” was 17 years in the making?

In a recent Netflix virtual press conference attended by Philstar.com, "Army of the Dead" writer and director Zach Snyder revealed that it was first turned down by Warner Bros. because of its big budget requirement. He also said that the movie was not written for him to direct so he wrote it from scratch.

At the press con, Snyder revealed other fun facts about the film:

Though it was a follow-up to his action horror flick "Dawn of the Dead," "Army of the Dead" features zombies that are different from its 2004 predecesor. The zombies, this time, have been described by Snyder as "awesome" and "formidable" or "cannot be beat in a fight," but are "not ambitious," meaning, they are "like lions that act out only when poked."

As such, great acting is required from stuntmen to make the zombies seem as if nobody survives them.

Yes, even zombies have names

Likewise, in "Army of the Dead," the zombies are led by "mythological-like" "Alphas" or most-evolved zombies such as the king, Zeus; the queen, Athena (after the hot actress who played her, Athena Perample, who first rose to fame as a cheerleader on "Glee") and Spider, the general.

Among the many "species" of zombies seen in many zombie films, Snyder thought the "I Am Legend" zombies are "pretty scary" and strong because they are like a hybrid between vampires and zombies.

Difference from other zombie movies

While the zombies in other films seem to be set in a certain period, the zombies in "Army of the Dead," said Snyder, are "based in another world" that he led in creating.

The director admitted that like other movies (most notably Marvel films that had Stan Lee), he also had an "Army of the Dead" cameo, but not as a zombie.

According to him, his image was briefly flashed in the mirror inside the casino.

The best zombie movies, he said, are social commentaries. And Vegas, he said, is an "excellent place for origin" because it raises the stakes high for people to want to go there despite risks because it has a lot of money.

“I love Dave. Dave and I have been talking for years about doing movie. I don’t want to do another action movie. I like his vulnerability, he plays a very broken character that tries to reconnect with daughter, why I chose him to play,” he said.

Not just zombies: It's about father-daughter relationship

The director bared that the movie centers on the father and daughter relationship between Scott and Kate.

According to Snyder, he wrote Scott and Kate's characters based on his own experience as a dad.

"I went through my own catharsis, my greatest heights and lows from my own children – and channeled those pain and joy in writing Scott and Kate," he shared.

Even Zeus, the zombie king, has been portrayed as a loving father in the film.

Not a pandemic film

In response to a Philstar.com question if Snyder sees any parallelism between the movie and the pandemic, the "Justice League" director said: “It depends on the viewer. But ('Army of the Dead') was custom-made for viewers of all times. If you want to make a weird deep-dive about what mythological representation of zombies, holding up a mirror to ourselves, that’s fine, too. If you want to be political – there's the wall, refugee camps, the heist part of it. But a father and daughter relationship is what I really want it to be."

According to him, "After doing giant superhero movies that get you further away from the camera… shooting zombies are my favorite part of the cinematic experience."

He revealed that the movie was also epecially made for TV, "but with big giant movie approach to give you a movie feeling even from home."

'Origin' movie in the works

“I’m incredibly excited for the opportunity to partner with Netflix again as we expand the 'Army of the Dead' universe with both an international prequel, as well as exploring the visually dynamic world of animation. It’s been a great collaboration and we are thrilled that Netflix sees this as big of an IP as we do," Snyder said in a Netflix statement released last September.

“It has already been a great pleasure to be part of this wonderful ensemble around Zack Synder – a fascinating project. I am happy that it is now being developed on so many different levels," said Matthias Schweighöfer.

The anime series, "Army of the Dead: Lost Vegas," chronicles the origin story of Scott (Dave Bautista) and his rescue crew during the initial fall of Vegas as they confront the mysterious source of the zombie outbreak. Snyder will direct 2 episodes of the anime series. Jay Oliva (Batman: The Dark Knight Returns and upcoming Netflix Original Anime Series Trese) will be showrunning as well as directing 2 episodes of the series. The series will be Executive Produced by Deborah Snyder, Zack Snyder, Wesley Coller from The Stone Quarry alongside Jay Olivia and Shay Hatten. Bautista, Ana de la Reguera, Tig Notaro, Omari Hardwick and Ella Purnell will reprise their roles in the anime series.

Share
Previous US ‘very pleased’ with Duterte’s move to hold off VFA abrogation: envoy
Next Museums and Historical Sites in NCR+ Are Now Allowed to Open