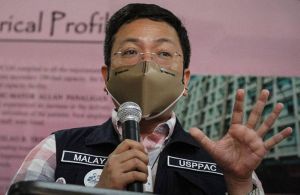 THE Department of the Interior and Local Government (DILG) called on the Commission on Elections (Comelec) to reactivate its task force against vote buying.

Speaking during an information drive on responsible voting in Marikina City on Monday, DILG spokesman Jonathan Malaya said the task force was activated during the 2019 midterm elections, but its operations were limited to the provincial level.

For the May elections, Malaya said he has requested the Comelec to allow the task force to cover even the municipal level.

The group will work closely with the Philippine National Police, National Bureau of Investigation and the DILG.

Malaya said vote buying has always been a serious problem during elections. But while it has become an accepted practice, the government has not mounted a substantial drive to stop it.

He said vote buying is rampant in municipalities where there are not enough government personnel to prevent it.

Information drives alone may not be sufficient to curb vote buying, Malaya said. The media must also get involved in exposing the practice and gathering evidence strong enough to warrant prosecution.

He also said “it is our contribution as citizens to register and cast our vote.”

In a chance interview with The Manila Times, Jimenez warned people who are out to disrupt the elections against carrying out their plot.