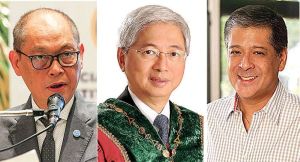 Benjamin Diokno, Alfredo Pascual, PHOTO FROM UP OFFICE OF THE PRESIDENT VIA WIKIPEDIA and Anton Lagdameo

Diokno on Thursday confirmed he has accepted the invitation to head the Department of Finance.

The 74-year-old Diokno was Budget and Management secretary under the Estrada administration from 1998 to 2001 and again under President Rodrigo Duterte from 2016 to 2019.

Taking Diokno's place at BSP will be Monetary Board member Felipe Medalla.

The president-elect has so far named 13 appointees to his Cabinet.

Pascual, a former president of the University of the Philippines (UP), currently heads the Management Association Philippines.

Bonoan served as Public Works and Highways undersecretary for the Visayas and Mindanao in 1998.

“He has spent almost his entire professional life in the DPWH. I know him very well, so I know he will do a good job,” Marcos said of Bonoan.

The position is relatively new, created when Duterte assumed office in 2016, and with Sen. Christopher Lawrence “Bong” Go as its first head.

Lagdameo is a three-term legislator from Davao del Norte's second district and a longtime friend of Marcos.

“Between the two of us, we already found a 'modus vivendi' so that should be an easy position for me to pick up on,” Marcos said.

The other nominations of Cabinet posts are Vice President-elect Sara Duterte-Carpio for Education secretary, Benjamin “Benhur” Abalos Jr. for Interior and Local Government, Vic Rodriguez for Executive Secretary, Susan Ople for the Migrant Workers department, Rep. Jesus Crispin “Boying” Remulla for the Justice department, Bienvenido Laguesma for Labor and Employment, and Arsenio Balisacan for the National Economic and Development Authority.

“The important thing for me is getting the right people,” Marcos said.

In accepting the new president's offer, Diokno emphasized the importance of policy continuity.

“Prior to the pandemic, the Philippines was poised to transition into an upper-middle-income economy, thanks largely to sound economic policies put in place over decades by multiple administrations.

“As the country transitions to the next administration, it is my view that continuity of sound macro and fiscal policies is important to achieve the stronger post-Covid Philippine economy that we all aim for,” he said.

“As Finance secretary, I will strive to continue prudently and carefully balancing the need to support economic growth, on one hand, and to maintain fiscal discipline, on the other,” he added.

He also holds an MA in Political Economy from the Johns Hopkins University in Baltimore, Maryland, USA, and a PhD in Economics from the Maxwell School of Citizenship and Public Affairs, Syracuse University in Syracuse, New York, USA.

Albay Second District Rep. Jose Maria Clemente “Joey” Salceda said the selection of Diokno to head the Finance department is, by far, the “strongest” appointment that Marcos has made.

Salceda, who is an economist himself, said he will get in touch with Diokno soon “to talk about ways forward on fiscal reform.”

He also lauded the selection of Medalla as BSP governor.

“All in all, the Diokno, Balisacan, and Medalla appointments are solid choices and I expect to work with the economic team more closely in the weeks ahead,” Salceda said.

Trade and Industry Secretary Ramon Lopez welcomed the appointment of Pascual as his successor.

In a statement on Thursday, Lopez described Pascual as an “excellent choice.”

“With his competence, integrity, energy and a wide range of experience in different industries, I know he will steer DTI towards greater heights in the years ahead,” Lopez said.

Philippine Chamber of Commerce and Industry President George Barcelon also expressed confidence that Pascual will be able to lead DTI.

“The private sector knows that he is a professional. He is a personal friend and I know he is very capable. When he was the former UP president, he expanded the campus of UP not only in Diliman but also in other regions,” Barcelon said.

“Our wish is for the DTI to promote the Philippines to be in the radar as far as foreign direct investments are concerned,” he said.

Medalla will take over BSP beginning July 1 and will serve the remaining term of Diokno until July 2023.

He was appointed to the Monetary Board in July 2011, and was reappointed for another term in July 2017.

Before joining the board, he was dean of the UP School of Economics, as well as vice president for planning and finance of the UP System.

Medalla was also the socioeconomic planning secretary and director-general of NEDA from 1998 to 2001 and a member of the Presidential Task Force on Tax and Tariff Reforms formed in 1994.

He was also a former president of the Philippine Economic Society, as well as chairman of the Foundation for Economic Freedom, a nongovernment organization primarily engaged in public advocacy for fiscal reforms and market-friendly government policies.