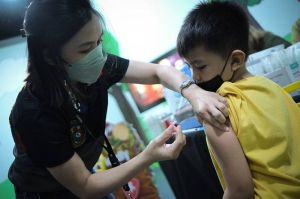 A PHARMACOLOGIST-TOXICOLOGIST on Thursday pleaded with the government to stop its Covid-19 inoculation drive, saying the shots being administered are already obsolete to prevent infection.

Interviewed by The Manila Times after testifying before Judge Maria Cherell de Castro-Sansaet of the Quezon City Regional Trial Court's Branch 222, Dr. Romeo Quijano said he warned the court about the threat the vaccines present to human health.

The court is hearing the petition of a group of parents who are against Covid-19 vaccination for minors.

“I am now begging the government, please stop this Covid-19 inoculation. For sure, there are already a big number of people who have suffered seriously, and others have died after being inoculated with the Covid-19 vaccines and more are still suffering as a result,” Quijano said.

He said some of the serious cases were never reported to the public.

Quijano accused the Department of Health (DoH) of deception by not disclosing the vaccines' serious side effects such as severe allergic reaction, inflammation of the heart, blood clotting, convulsion, respiratory depression, sleep disorder, tinnitus and vertigo.

The DoH, Quijano said, always emphasizes the less severe side effects like pain, redness, itchiness or swelling at the injection site, fever, weakness or fatigue, headache, dizziness, diarrhea, or nausea.

Quijano said he joined the Concerned Doctors and Citizens of the Philippines (CDCPh), a volunteer group that wants to help the government to safely address the Covid-19 pandemic.

In his paper, “Balancing Risks and Benefits: Covid-19 Vaccines,” he countered the claim of the DoH and the United States Centers for Disease Control and Prevention (CDC) that getting jabbed prevents symptomatic and severe infection and that the shots are safe and effective.

“I would like to emphasize that claims of vaccine efficacy were based mainly on studies done by the companies selling the vaccine; clearly, there is a conflict of interest. These studies are the ones used by regulatory agencies and governments in deciding on vaccine mandates,” he said.

Public Attorney's Office (PAO) chief Persida Rueda-Acosta said lawyers from the Office of the Solicitor General are expected to cross-examine Quijano next month.

Rueda-Acosta, who serves as principal counsel of the parents-petitioners, said PAO-Forensics Division chief Dr. Erwin Erfe will take the witness stand after Quijano.

Erfe, who is also a lawyer, “will question the sincerity and integrity of DoH in carrying out Covid-19 vaccinations, especially for minors ages 5 to 11 years old,” she said.

In an interview with The Times, Erfe warned that the DoH committed grave violations when it conducted the mass vaccination of schoolchildren against dengue using the controversial Dengvaxia vaccine in 2016.

Erfe said dozens of autopsies he and his team conducted indicated that the deaths of over 160 schoolchildren were linked to Dengvaxia.

Rueda-Acosta said the main petitioners led by broadcast journalist Dominic Almelor, a father of a 7-year-old boy; and Girlie Samonte, a mother of two boys, were also expected to testify after Erfe.