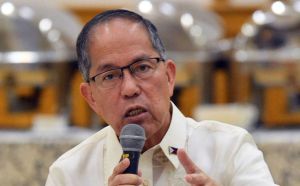 THE Department of Labor and Employment (DoLE) has rejected calls to abolish the Regional Wages and Tripartite Boards (RWTBs), saying that these are the most effective mechanisms in the determination of minimum wage adjustment.

Labor Secretary Bienvenido Laguesma pointed this out amid calls from some sectors to abolish the RWTBs claiming these have become irrelevant. These groups want Congress to determine minimum wages through legislation.

Laguesma explained that the best option in the determination of wage adjustment is through a dialogue between employer and employees because “they both know the real situation in the workplace” even as he stressed that the labor department recognizes the authority and power of Congress.

However, not many businesses or workplaces avail of the employer-employees dialogue policy, thus the regional wage boards remain as the best option in the determination of the minimum wage increase.

“We see that the wage board is still the most viable option because all sectors, workers, employers and government, which is represented by DoLE, have representatives in the board,” he added.

“The wage boards can approximate the right wage adjustments without jeopardizing the viability of the company, particularly small and medium enterprises (SMEs) which constitute more than 90 percent of businesses in the country,” Laguesma pointed out.

He explained that in the determination of the right amount of wage increase, it is not only the demand that is being looked at by the wage boards but also the capacity of the company or enterprise. The continuity of jobs and the opportunity to provide additional jobs are also considered.

The Labor chief earlier directed the RTWPB across the country to review the minimum wage situation amid the soaring prices of basic commodities and services due to inflation.

He made the call following demands from workers and labor groups for another round of increase in the daily take-home pay of more than 4 million workers in the private sector.

Laguesma pointed out though that the National Wages and Productivity Commission (NWPC) granted wage increases in June this year in all regions. No new pay adjustment is allowed within a year unless there is a compelling reason.

Earlier, the Trade Union Congress of the Philippines (TUCP), the country's biggest labor group, called on the government to institute reforms in the present system of wage determination, saying that it's time to abolish the 33-year-old wage-setting structure as it has already outlived its relevance.

Republic Act (RA) 6727 or the “Wage Rationalization Act” was enacted into law in 1989. It paved the way for the creation of the NWPC and the Regional Tripartite Wages and Productivity Board (RTWPB) in 17 regions of the country.

The RTWPBs are mandated to set a minimum wage that protects workers' welfare and promotes enterprise and workers' productivity. But since RA 6727 took effect, there has never been an instance when petitions for a wage increase from workers in the private sector were granted something close to their demand.

TUCP has pushed for the creation of a singular wage fixing body that determines an evidenced-based, uniform minimum wage rate nationwide, claiming that the current minimum wage setting mechanism only favors those of businesses and no longer balances the interest of workers.

On the other hand, the Nagkaisa Labor Coalition (Nagkakaisa), composed of 47 labor federations, workers' organizations in public and private sectors, and various urban and peasant groups, has pushed for the nationalization of the daily minimum wage that is equivalent to the prevailing rate in Metro Manila.

It explained that the regionalization of wages created wide gaps in wage levels because the wage fixing mechanism seeks the lowest level of balance in every region where the market-clearing price of labor is primarily determined on the basis of the employer's capacity to pay rather than on the worker's right to a living wage.

The labor sector explained that a uniform wage rate across 17 regions of the country is only fair because the poverty in Luzon is the same poverty felt by workers in Visayas and Mindanao, and the prices of commodities are the same in every region.