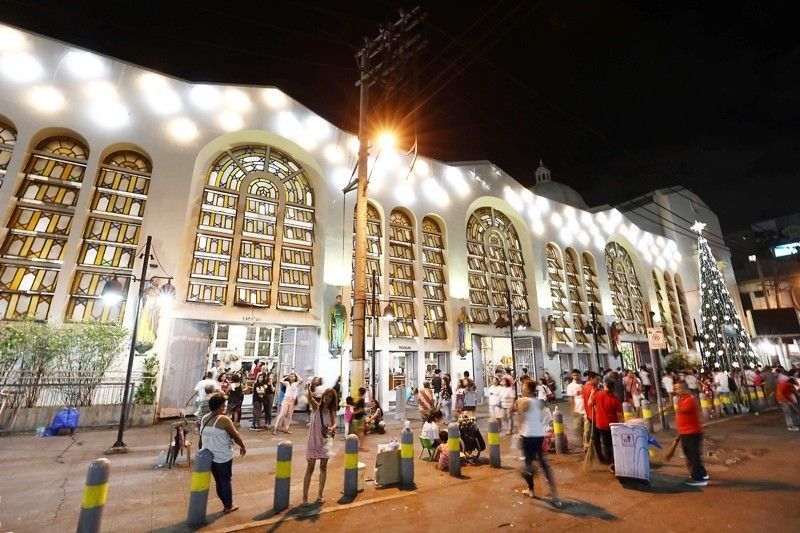 In this photo taken in December 2019, devotees attend the first anticipated Simbang Gabi at the Minor Basilica of the Black Nazarene in Quiapo, Manila.

Philippine bishops have issued guidelines on holding pre-dawn Masses early this month, as the coronavirus pandemic continues and as government braces for a post-holiday surge in infections.

"We cannot overemphasize the need to follow the minimum health protocols at all times," the agency in a statement. "Gatherings like Simbang Gabi can easily become superspreader events."

The DOH said it has seen "a reversal in the downward trend" of COVID-19 infections, which in simpler terms, would mean that cases are indeed likely to go up.

In the previous days, the OCTA research team, an independent panel of experts releasing its coronavirus forecasts, has said too that Metro Manila now has a 1.06 reproduction rate or the number of individuals that would contract the disease from an infected person.

Health officials are urging Filipinos to opt for livestreaming Masses instead of physically attending to reduce the risk of exposure to the virus.

Those who would attend Mass in person, meanwhile, were told to follow the one-meter physical distance, proper wearing of face masks and shields, as well as limiting the time in going out.

Churches and other venues for the Mass should also ensure proper ventilation.

"Avoid high-risk activities such as those conducted in enclosed spaces or areas with poor ventilation, activities like singing and shouting, and other forms that might involve physical contact," the DOH added.

The Catholic Bishops' Conference of the Philippines has allowed for the evening Masses to start as early as 6 p.m., while the Masses at dawn could begin by 6 a.m.

It also sought to remind that kissing or touching of images remains prohibited, recognizing that celebrating Christmas in the predominantly Catholic country will be different this year.

Churches across the country have found ways to thrive amid the ongoing health crisis, streaming liturgical celebrations on social media such as in renowned sites Manila Cathedral, Quiapo Church, the Redemptorists' Baclaran Church as well as the Dominicans' Santo Domingo in Quezon City.

TV Maria of the Manila archdiocese, has begun its live broadcast of Masses tonight, 4:30 a.m. at Wednesday dawn, and the succeeding Masses at 5:30 a.m. and 7:15 p.m.

Public worship had been restricted mid-March as the country entered the hard lockdowns that stretched on for months, only to be allowed again in July at 10% capacity in areas under general community quarantine.

Those in Metro Manila were allowed to resume in-person religious gatherings by September, and the capacity inside churches had since been increased to 30%, while places under modified GCQ at 50%.