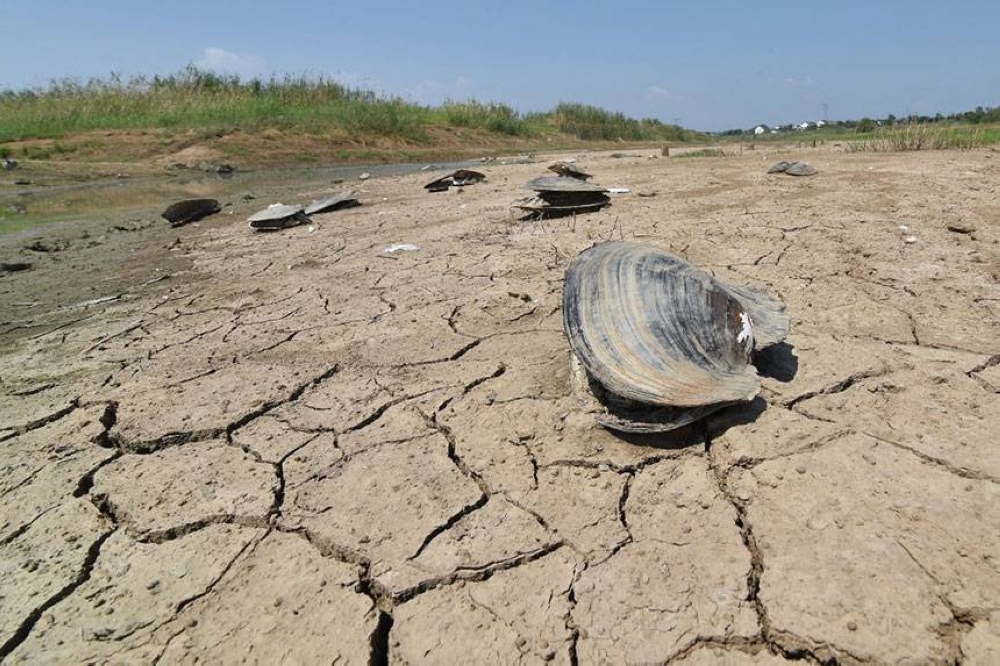 MAJOR parts of the world are in the grip of droughts, the magnitude of which is unprecedented, bringing the specter of a climate crisis dangerously closer.

In China, a nationwide drought alert has been raised after a heatwave has dried up rivers, including the mighty Yangtze. The low water level has slowed hydropower production, hampered inland shipping and temporarily closed down companies.

Similar record-breaking heatwaves have drastically shrunk the flow of the Rhine and the Loire in Europe, and the Colorado River in the United States.

The spate of droughts is not an isolated occurrence. A new UN report says drought frequency and duration has increased by nearly a third since 2000. And climatologists predict that droughts may affect more than three-quarters of the world's population by 2050.

The present figures are already ominous. The drought in China has affected at least 2.46 million people and 2.2 million hectares of agricultural land in at least six provinces.

Europe is experiencing its worst drought in 500 years, and 47 percent of the continent is under warming conditions.

Drought also has about half of the US sweltering, the worst being in the western, southwestern, and central states.

The culprit, of course, is the unabated rise in global temperature, something that countless climate summits have discussed but never fully addressed. Every summit conference ends with pledges from the world's economic giants to set carbon reduction targets, the crucial first step in limiting warming to acceptable levels.

But after the summit hoopla fades, those pledges are promptly forgotten, to be dusted off only when the next conference comes around.

Severe weather crises like droughts are reminders of nature's awesome power to wreak havoc on a global scale, and humanity's indifference to the danger it faces.

A severe drought can cripple energy production and disrupt international supply chains. It can decimate crops and trigger a drinking water shortage.

But its biggest impact is hunger. More than 18 million people in Ethiopia, Somalia and Kenya face famine after four consecutive years of lower-than-average rainfall.

Even developed countries are not spared, as a deadly combination of hot weather and heatwaves have spawned massive wildfires in the US and Europe.

Bernice Lee, chairman of the advisory board at the Chatham House sustainability accelerator in London, notes that countries are woefully “unprepared and underprepared” for high-impact, low-probability events like extreme droughts and heatwaves.

In 2019, the Philippines was in the throes of a drought that was generated by a severe El Niño episode. At least 10 provinces, mostly in Mindanao, were forced to declare a state of calamity. More than 13,000 hectares of rice and corn fields were parched, and losses ran up to P1.33 billion. Over 16,000 farmers were affected.

Such a devastation should have galvanized the government into reinforcing its climate change mitigation and adaptation efforts. But during the same year, the Duterte administration cut the proposed funding for climate change from P267.09 billion to just P63.6 billion.

The reduction reflected former president Rodrigo Duterte's low regard for climate issues. He once said that climate summits were a “waste of time.”

The Marcos government is clearly more attuned to climate developments. In his inaugural speech, President Ferdinand Marcos Jr. said that despite having “a very small carbon footprint,” the Philippines “is at the highest risk” for the fallout from climate change.

Marcos has drawn a basic strategy for tackling climate change: “First, spare victims; then help them recover, and move on to lessen the harmful impact of climate change.”

His climate agenda will have to be fleshed out by the Climate Change Commission. Robert Borje, vice chairman of the commission, has said climate change needs to be mainstreamed — making the people more aware of how it affects them and what they can do to mitigate it.

That is a good place to start. But moving the climate agenda forward will require political will and focus. The Marcos administration must have both.