DSWD pays out P260-M in emergency aid to 49K families 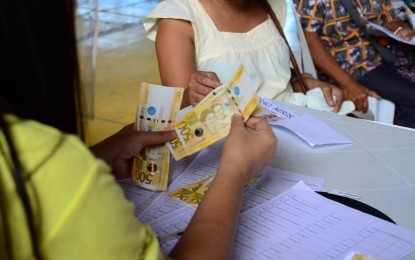 MANILA – The Department of Social Welfare and Development’s (DSWD) Emergency Subsidy Program is still ongoing despite the length of restrictions being implemented due to the novel coronavirus pandemic.

As of Jan. 3, DSWD said it has distributed financial assistance to 49,039 family beneficiaries of the ESP.

The agency added that the aid was worth PHP260 million.

These families, according to DSWD spokesperson Irene Dumlao, are those classified as low-income households by their local government units (LGUs) but were not qualified to receive the Social Amelioration Program (SAP) which was implemented during the first version of the Bayanihan law or the Bayanihan to Heal as One Act (RA 11469).

The SAP was distributed to 14.2 million families with a budget of PHP199.975 billion, the biggest sum released for social protection in the history of Philippine governance.

Additionally, the agency has catered to low-income families with members who are returning overseas Filipino workers and are residing in areas under granular lockdown.

Late last year, the agency announced that SAP will no longer be part of their annual budget appropriation because its programs will be focused on the recovery of Filipino households heavily affected by the pandemic.

DSWD said the ESP in Bayanihan 2 came in a smaller portion compared to the SAP.

“After the SAP, livelihood grants will be strengthened,” Secretary Rolando Joselito Bautista said.

As such, there has been more movement in the agency’s sustainable livelihood program, livelihood assistance program, and others that incorporate the cash-for-work scheme.

In September, the Department of Budget and Management backed the government’s decision to move forward from prioritizing cash subsidy programs to banking on programs that support economic growth in 2021.

It is also stipulated under the Bayanihan 2 that the Department of Trade and Industry, Department of Labor and Employment and the Department of Agriculture are directed to maximize their loan programs to shoulder the cost of start-up entrepreneurs and/or families who are rebuilding their businesses. (PNA)