That was what President Rodrigo Duterte told Willie Revillame during a phone call last Feb. 27. The story came out as a “scoop” in The Star. Willie was invited to dinner by Sen. Bong Go and Executive Sec. Salvador Medialdea in a Greenhills restaurant arranged by Sen. Bong’s good friend Siomai King Jonathan So. Sen. Bong called DU30 and passed the phone to Willie. After thanking Willie for helping the needy through his GMA show Wowowin/Tutok To Win, DU30 asked Willie about his plan. Didn’t he want to expand his charity work (palawakin ang pagtulong) by joining the government? “Kasama ka namin sa grupo (you are with us in the group),” DU30 assured Willie. 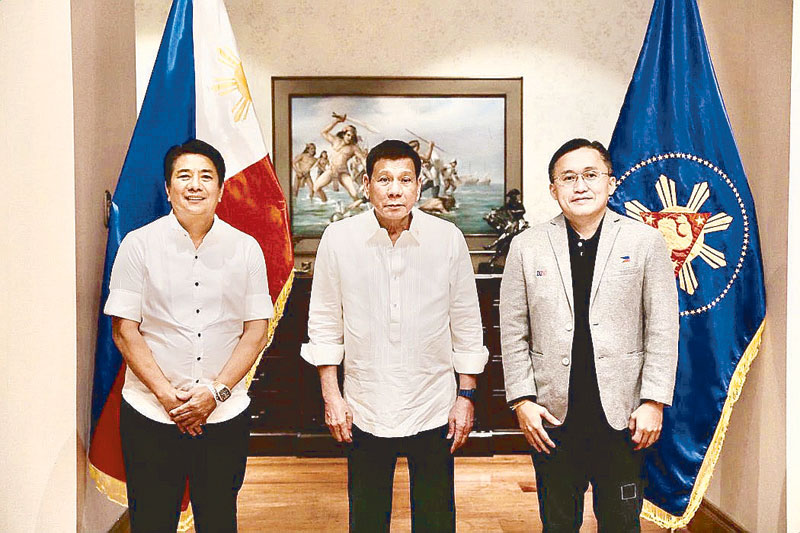 During that earlier phone chat, the President told Willie that he watched Willie’s show. Again, between spoonfuls at dinner, the President thanked Willie for what he’s doing for the jobless jeepney drivers, the flood victims in Montalban and Marikina, and what he’s doing on his show every day…giving away tablets, cash (ranging from P30,000 to P50,000, with a jackpot prize of house and lot, plus P1M to the lucky winner of the Kuwarta O Kahon segment during special occasions). A simple fare was served during the meeting, consisting of fish and vegetables, downed with water and soft drinks. Steak and expensive food are reportedly ‘bawal’ in Malacañang

The free-wheeling conversation was mostly in the vernacular.

Willie replied, “Wala akong balak (I have no plan); panay isip-isip (just thinking-thinking). As it is, I am happy that I can dance and sing and do everything to entertain and help people. I became known (as a TV host) and I can’t just set it aside because many people are dependent on me…my staff and the poor. Willie Revillame is in a quandary as he hits a turning point in his life (after he turned 60 last Jan. 27). The big question is: Can he say no to the President?

“At saka hindi ako magaling mag-English at wala akong alam sa mga batas. The only thing I know is make people happy and help them to the best of my ability, hanggang kaya ko.”

“Help the government,” the President said. “Whatever your decision is, tell me and I am willing to help you. Gusto ko tumakbo ka (I want you to run). I will accompany you anywhere you go” …during the campaign?… “Sasamahan kita kapag nakapag-desisyon ka na, kahit tayong dalawa lang sa lahat ng lakad mo.”

Up to now, the President’s daughter, Davao City Mayor Sara Duterte-Carpio, insists that she’s not running even if she is topping surveys on presidentiables. It’s only seven months before the start of the filing of COCs (Certificate Of Candidacy), but still enough time for Sara or Willie to change their minds. The (wild?) guess is that if and when Sara runs, Willie will be tapped as her running-mate. If she wouldn’t and if Sen. Bong would (with the President as running-mate?), Willie would be made to run for senator. “Naniniwala ako sa’yo,” the President told Willie. “Gusto ko No. 1 ka kasi maganda ang puso mo, kaya mahal ka ng Diyos, kaya mahal ka ng tao.”

Is Willie still, ehem, keeping his options open? Can he say no to the President? Will he be persuaded to run or will he stay in Wowowin/Tutok To Win?

“I am at a turning point in my life,” admitted Willie. “I am 60 now and what else can I do? I am trying very hard to weigh things. If ever, it would be the hardest decision of my life.”

Before they parted, the President again thanked Willie and told him that they would meet again “next week.”

By then, will Willie finally have weighed his options and made a decision?