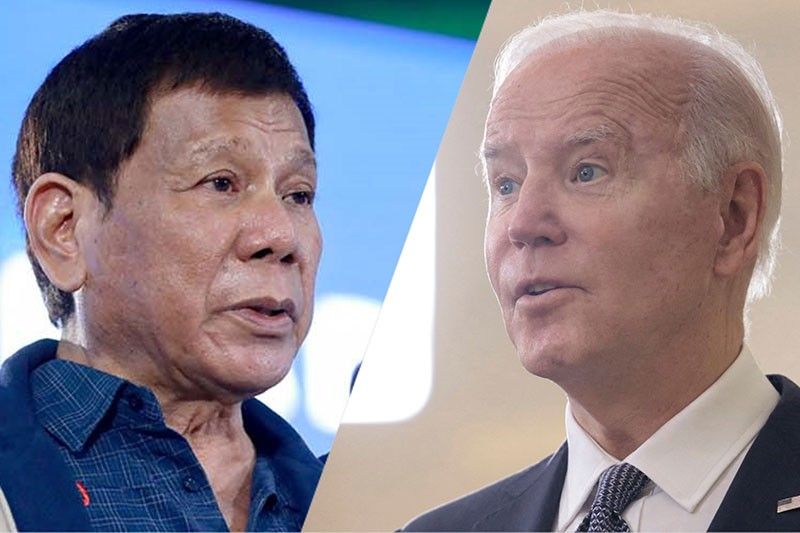 MANILA, Philippines — President Rodrigo Duterte is set to join the US-organized Summit for Democracy to be held this week, Malacañang announced Tuesday.

"President Rodrigo Roa Duterte has accepted United States President Joseph R. Biden, Jr.'s invitation to participate in the Summit for Democracy on Dec. 9-10, 2021," a statement issued by the Office of Presidential Protocol read.

The statement noted that Biden has invited heads of states, government leaders, and representatives from the business and non-government sectors to join the virtual summit.

Citing Biden's invitation to Duterte, Malacañang said the US would host the Summit for Democracy "with humility and in the spirit of mutual learning."

"President Biden further said that together, we will 'embark on the work necessary to shape a prosperous and peaceful future built on respect for the rights and aspirations of all people,'" the Palace statement read.

Biden, Malacañang added, is looking forward to welcoming Duterte and hearing his ideas on how they can foster a "more democratic, equitable, inclusive, and sustainable world."

"We recognize and appreciate your partnership in working to build democratic and human rights-respecting societies that allow all citizens to thrive. In a moment of significant challenge and enormous opportunity, it is more important than ever for democracies to prove that we can deliver for the needs of our people," the Palace statement quoted Biden as saying.

Duterte, the statement said, welcomes the opportunity to "share the Philippine democratic experience and commitment to democratic values and nation-building" at the summit.

The US under former president Barack Obama had assailed the alleged extrajudicial killings linked to the Philippines' drug war, prompting Duterte to accuse Washington of interfering with Manila's internal issues.

Earlier this year, Duterte thanked the US for donating COVID-19 vaccines to the Philippines and expressed readiness to go to Washington to personally express his gratitude to American officials.

A thread of major developments in the bilateral relations between the Philippines and the United States from January to December 2021. (Presidential photo/Joey Dalumpines and AFP/Angela Weiss)

The US government establishes a five-year grant worth P800 million to promote natural resource conservation, and ecosystem and community resilience, by supporting civil society organizations in advocating for, and participating in, good natural resource governance.

The grant will be launched through the Investing in Sustainability and Partnerships for Inclusive Growth and Regenerative Ecosystems (INSPIRE) project.

“Through the INSPIRE project, USAID is pleased to support the Philippines’ efforts to conserve the country’s rich biodiversity and mitigate the impacts of climate change while making sure that the environment continues to benefit many Filipinos whose incomes depend upon these natural resources," USAID Acting Mission Director Sean Callahan says.

The United States Embassy in the Philippines launches a livelihood program for those who are recovering from substance abuse order.

In partnership with the United Nations Office on Drugs and Crime, the US Embassy's International Narcotics and Law Enforcement Affairs is providing PhP5 million ($100,000) to support the "Ako ang Saklay" program.

“Livelihood programs, such as those facilitated by Ako ang Saklay, can result in quality-of-life changes for persons who use drugs, their families, and their communities,” INL representative Mark Everson says.

The US Peace Corps, in partnership with the DepEd, concludes a series of virtual trainings for educators on using newly developed distance training materials.

The training ran from October 12 to 29, which involved 1,000 teachers, principals and supervisors from Luzon, Visayas and Mindanao.

“Studies show that high-quality instructional materials significantly increase academic outcomes by allowing students to engage more deeply and meaningfully with their learning. This has never been more important than now, with students still schooling online due to the ongoing pandemic,” DepEd Bureau of Learning Delivery Director Leila Areola says.

USAID launches a five-year project worth P750 million ($15 million) to build climate resilience in the Philippines.

The Climate Resilient Cities project will help cities in the country to mitigate, and endure the impacts of climate change by increasing their access to climate financing and tools to build resilience, the US Embassy says.

The donation was made in response to the request of the Palawan provincial government amid a surge of COVID-19 cases in the province, the US Embassy says in a media release.

“This donation will help the people of Palawan a lot by upgrading our ability to fight against the pandemic. It comes at the perfect time due to the surge of new cases and will help us face this new challenge," Palawan Provincial Disaster Risk Reduction Office director Jeremias Alili says.