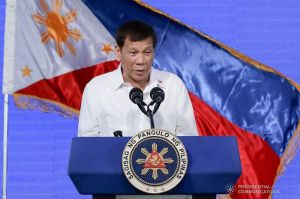 PRESIDENT Rodrigo Duterte said he is trying to replenish the intelligence funds that were used up by the government's Covid-19 response programs.

He said part of the funds, the amount of which he did not disclose, were used to prop up the tight budget of the military and the police.

“Binigyan ko lang 'yang pulis pati military ng… Sabi ko, you will just have to work on it (I gave the funds to the police and the military and told them they would have to make do with it),” the Presidient said.

Duterte said that because the pandemic was draining the intelligence funds he had to allow the continued operations of online cockfighting or e-sabong.

Online cockfights pump in P640 million in revenue every month.

The President said the money pays for unbudgeted expenses.

But he made it clear that he will suspend e-sabong if Filipinos become addicted to it.

“Itong mga ito nagpupusta lahat, nagsasangla na para magpusta. Iyon ang sabi ng tagalabas. Now if it is true, then hihintuin ko 'yan (I have been told that there are people who pawn their belongings just so they can place a bet. If that's true, then I will stop e-sabong),” Duterte said.

It was the second time in as many weeks that the President has threatened to freeze e-sabong franchises.

He pressed the police to “solve the crimes” related to online cockfighting, including the case of over 30 cockfight aficionados who have been missing since last year.

“They mention so many personalities there and all are capable of doing it because they have a criminal mind,” Duterte said.

A number of police officers and businessman Atong Ang have been implicated in the disappearance of cockfight enthusiasts. They all denied involvement.

The Philippine Amusement and Gaming Corp. (Pagcor) has said that from April to December 2021, it earned P3.7 billion from e-sabong, and another P1.4 billion so far this year.