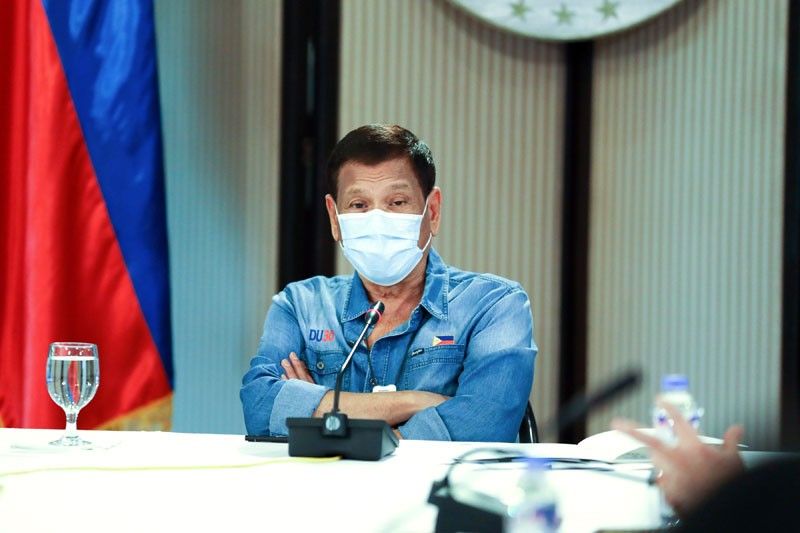 President Rodrigo Duterte wears a face mask during a meeting with members of the Inter-Agency Task Force on Emerging Infectious Diseases at Malacañang on April 13.

MANILA, Philippines — President Rodrigo Duterte has justified his decision to identify officials tagged in corruption and illegal drugs, saying he is fulfilling a "higher requirement" of informing the public about important issues.

Duterte, who has been reading the names of government personnel tied to alleged anomalies in recent weeks, said the government owes it to the public to tell the truth and anonymity won't help authorities perform their obligation.

"Sabi ng batas na hindi ko dapat sabihan ‘yang mga kaso (The law says I should not talk about the cases). But I would like to take the higher ground. Anonymity does not help at all," the president said during a pre-recorded public address aired last Wednesday.

Duterte went on to read the names of officials tied in the "pastillas" bribery scheme, which resulted in the entry of illegal Chinese workers. Under the scheme, grease money was reportedly folded like pastillas, a popular Filipino dessert, and given to corrupt immigration and personnel.

"They are now suspended but they are connected to the 'pastillas (scheme).' This may result in their dismissal, suspension or exoneration if warranted," he added.

"I have a feeling that all of them will be dismissed… Perhaps it becomes a ghost office if the majority of the people are removed," Duterte said, adding that the immigration personnel were suspended by the Office of the Ombudsman effective December 10.

Duterte also ordered law enforcement agencies not to cover the faces of people involved in illicit drugs trade especially those who were caught in the act.

"So that I think is the higher requirement of a public officer, especially the president, who is the overall in charge of law and order. My take is that they should be exposed in public, especially (drug) pushers so they won't repeat (their wrongdoing)," he said.

Last month, Duterte said he won't identify the lawmakers tagged in irregularities in local public works projects, saying he could not investigate members of a separate and co-equal branch of government. He said the ombudsman should conduct such a probe because it is the only investigating agency that has jurisdiction over congressmen.

The president, however, revealed the names of officials implicated in the narcotics trade even if they are not part of the executive branch in 2016. Presidential spokesman Harry Roque recently claimed it was easier to establish the wrongdoing of those who were into illegal drugs.