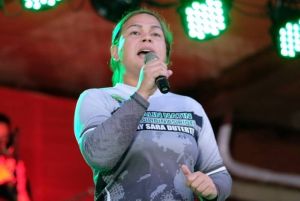 Speaking in Visayan during the campaign sortie of his ruling political party Partido Demokratiko Pilipino-Lakas ng Bayan (PDP-Laban) in vote-rich Cebu on Thursday night, Duterte is confident that his daughter would continue his legacy if she gets elected.

“Ang akong — ang ako, ako retired. Akong anak modaga'g bise-presidente. Og inyong tan-aw nga… Actually, this is the first time nga gigamit nako ang akong pagka-amahan nga — sa anak. Nagkuan ko eh, nakaagi'g samok. Pero anak is anak is anak (I'm going to retire, but my daughter is running for vice president. If you think that… Actually, this is the first time that I'm using my name as a father, for my daughter. It's because we've had issues, but she is my daughter),” Duterte said.

The President said his daughter, given her qualities and leadership style, would be a great fit for the vice presidency.

“You can't crowd around waiting for her, you will be called one by one instead. But she will talk to you. And that's good, that's actually good. She can serve people in an orderly manner,” he said.

The President, in a taped video message played at an event in Cebu City on March 19, had advised Sara to “be true to [the] country” and “work hard for the people.”

While he expressed support for Duterte-Carpio's vice presidential bid, Duterte maintained that he would not endorse any presidential candidate as he opted to stay “neutral.”

The President made the statement despite his recent meeting with Marcos that prompted the PDP-Laban to support the presidential hopeful's candidacy.

“I am not supporting any presidential candidate. Neutral ako (I'm neutral). So, this is not a campaign because I'm not campaigning for a particular candidate. So stop f****** with me dahil hindi ito politika (this is not politics),” Duterte said.

“I had to [meet them]. Siyempre (Of course), I had to talk to them, taas ng kamay nila. Well, ang buhay ng pulitiko (and raise their hand. Well, that's the life of a politician),” he added.

Marcos is the standard-bearer the Partido Federal ng Pilipinas, while Duterte-Carpio is running under the Lakas-Christian Muslim party.

The tandem, dubbed as the BBM-Sara UniTeam, has consistently led pre-election surveys for their respective positions.