Duterte hopes 35% of Philippines’ eligible population will be vaccinated

Duterte hopes 35% of Philippines’ eligible population will be vaccinated 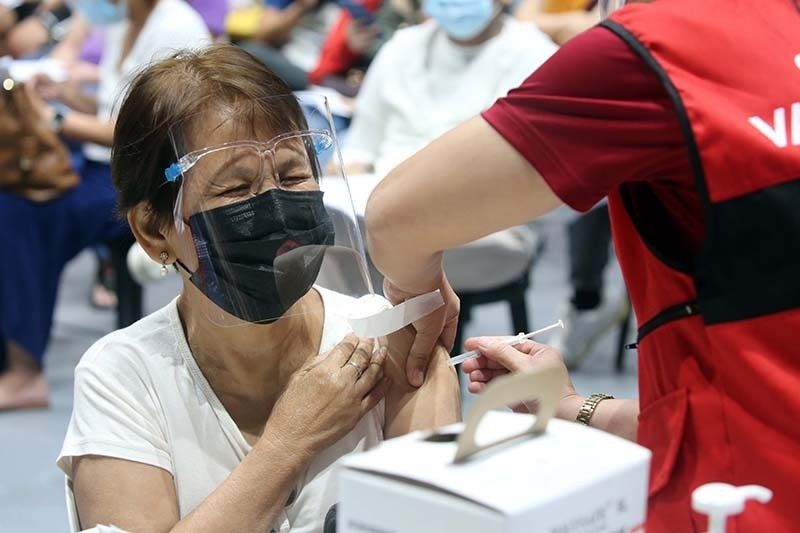 MANILA, Philippines — The government aims to vaccinate more than a third of the Philippines' eligible population this month and at least half of them by yearend, President Rodrigo Duterte said, as officials count on the inoculation program to achieve a "better'' Christmas and a safe election period.

Duterte said more than 46.2 million COVID-19 vaccine doses have been administered and more people are expected to get jabbed with the opening of the inoculation to the general population and to minors this month.

"By October this year, we hope that we will be able to fully inoculate 35 (percent) of the country's target population with the end goal of reaching at least 50% by year-end. We are also targeting to administer at least 50 million doses by the month’s end," the president said during a pre-recorded public address last Monday.

"For the last quarter, we are confident that we can fully vaccinate more than a majority of our population before Christmas. I therefore, again, encourage our kababayans to have yourselves vaccinated," he added.

Vaccine czar Carlito Galvez Jr. said more than 21 million Filipinos or nearly 30% of the eligible population have been fully vaccinated. He added that the country has enough supply of pandemic jabs, with more than 31 million doses in its stockpile.

Galvez also cited the need to recalibrate the vaccination program and to modify timelines to meet the adjusted target of inoculating 80 to 90% of the eligible population. Experts have recommended adjusting the target from 70% of the target population because of the emergence of more contagious COVID-19 variants.

"The most desired outcome is to have safe and equitable, cost-effective vaccination, including the pediatric and booster vaccination, at the same time (the vaccination of) our general population that we will start in the fourth quarter," Galvez said.

"We also have what we call protecting the center of gravity through 'focus and expand' to critical cities and areas; and… the achievement of a better Christmas and safe election period," he added.

Galvez said the vaccination of the eligible population should be completed by February, the start of the campaign period for national posts. Testing czar Vivencio Dizon expressed optimism that the target is doable because of adequate vaccine supply.

"Our fully vaccinated rate is 28% and we are confident that with the vaccines that have come in starting October, because of the hard work of Secretary Galvez, we will be able to meet or even exceed that target," Dizon said.

"It seems that our goal of having 70% fully vaccinated by February of 2022 can be attained so that when the campaign period starts, our countrymen will be safe… But given the supply, I think we can do it," he added.

Galvez said the government is expecting the delivery of 140 million to 160 million doses of pandemic shots by the end of the year.

He added that the finance department has started negotiating with multilateral financing institutions for the procurement of additional jabs next year. According to Galvez, the agency has begun talks for P45 billion multilateral funding for the purchase of more COVID-19 vaccines. The government is finalizing multilateral loan arrangements with the Asian Development Bank, Asian Infrastructure Investment Bank , and the World Bank, he said.

Galvez also reported that negotiations with four to five vaccine manufacturers are also ongoing for a non-binding terms sheet for the supply of 90 million doses early next year.

"And then we are asking our vaccine experts to come up with real world data on the efficacy of the different vaccines because we will be buying second wave generation of vaccines this coming 2022 and we want to see the list of the portfolio," he added.