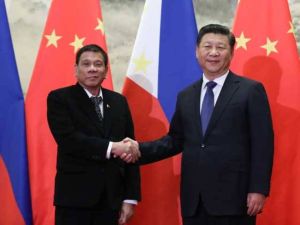 In this file photo President Rodrigo Duterte (left) shakes hands with Chinese President Xi Jinping prior to their bilateral meeting at the Great Hall of the People in Beijing on Oct. 20, 2016.

(UPDATE) PRESIDENT Rodrigo Duterte said he will discuss with Chinese President Xi Jinping his concerns over the conflict in Ukraine spilling over into Asia and dragging the Philippines into the “vortex of a war.”

In a speech in Lapu-Lapu City Thursday, Duterte revealed that he and Xi are scheduled to have a meeting on April 8. He did not specify if the meeting was to be face-to-face or by phone.

Russian forces invaded Ukraine a little more than a month ago, and there were fears that the war could escalate into a global confrontation of superpowers if Russian President Vladimir Putin decides to use nuclear weapons to subdue stiff Ukrainian resistance.

Duterte said once nuclear weapons are deployed, “there's going to be serious trouble.”

He said China, who is Russia's ally in Asia, “will not just sit idly by.”

Duterte said Beijing could attack Taiwan, which it considers to be a Chinese province that has gone rogue. A full-scale war in Taiwan will affect the Philippines, where the United States military maintains a presence, he said.

That could bring the country into the vortex of war, Duterte said.

He said he has allowed the United States the “unrestricted use” military facilities in the Philippines “because it will be a stupid thing [to send them away]. Nandiyan na kasi (They're already there).”

The facilities could include the former US bases in Subic in Olongapo City and Clark in Pampanga.

But Duterte made it clear that he will not allow Philippine soldiers to participate in the conflict in Ukraine.

Duterte announced his meeting with Xi days after the Department of Foreign Affairs filed a diplomatic protest against Beijing over the “dangerous,” close-distance maneuvering of a Chinese coast guard ship near the Philippine Coast Guard's BRP Malabrigo at the Bajo de Masinloc last March.

Chinese Foreign Ministry spokesman Wang Wenbin has defended the presence of the Chinese coast guard in Bajo de Masinloc, claiming it to be Chinese territory, contrary to the declaration by the Permanent Court Arbitration that the waters around it are common fishing grounds.

Foreign Affairs Secretary Teodoro Locsin Jr. is in Beijing after the Chinese government invited the foreign ministers of neighboring countries for a dialogue.

In several speeches, Duterte has expressed willingness to visit China to personally thank Xi for China's donation of Covid-19 vaccines.

He described the donation as a “gesture of friendship and solidarity.”

Duterte's last trip to China was in August 2019. That was when he raised the Philippines' 2016 arbitral victory against China's maritime claims in the South China Sea.

China has repeatedly refused to acknowledge the arbitral court's ruling.