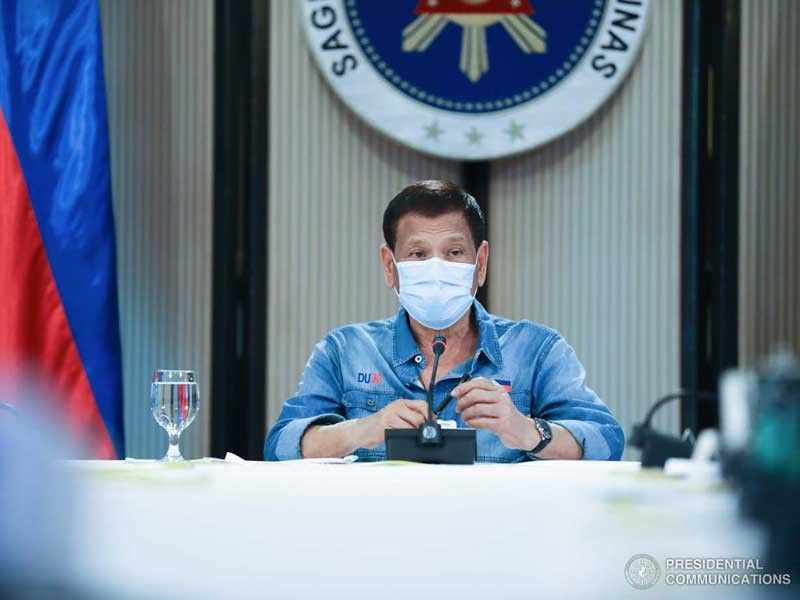 President Rodrigo Roa Duterte holds a meeting with some members of the Inter-Agency Task Force on the Emerging Infectious Diseases (IATF-EID) at the Malago Clubhouse in Malacañang on April 13, 2020.

MANILA, Philippines — President Rodrigo Duterte has vetoed about a dozen provisions of the 2021 national budget, including one that requires the executive branch to submit quarterly reports on the use of intelligence funds to Congress.

In a 16-page veto message on next year's budget, Duterte said intelligence funds cover programs, projects and activities related to national security that are deemed confidential. Matters relating to national security, the president added, is one of the recognized exceptions to the right to information.

Duterte pointed out that there is a governmental privilege against public disclosure of state secrets regarding military, diplomatic and other national security matters.

The president also vetoed five provisions related to the use of income of state agencies. Duterte said as a general rule, all income of agencies shall accrue to the general fund of the national government, unless otherwise authorized by a separate substantive law. The income shall form part of the revenue and financing sources that would fund the government's expenditure program, he added.

"Relatedly, it must be emphasized that the necessary operating requirements of agencies for the year have already been provided in this Act," Duterte said.

"Therefore, provisions allowing agencies to use their income without separate legal bases are not only considered as 'riders' but will also have the effect of reducing the sources of financing of this year's budget while increasing the appropriations of the agencies beyond their approved expenditure levels," he said.

Vetoed were the special provisions on the labor department's alien employment permit; Philippine Overseas Employment Administration's use of income; Philippine Racing Commission's use of income; and the Optical Media Board's confidential funds. The president also rejected a special provision allowing the Subic Bay Metropolitan Authority to use excess dividends, noting that the law explicitly requires all government-owned or -controlled corporations to declare and remit at least 50 percent of their annual net earnings as cash, stock, or property dividends to the national government, unless the national economy and general welfare requires the percentage to be adjusted.

Duterte also vetoed what he described as "inappropriate provisions" in the budget. The provision requiring the submission of quarterly reports on the use of intelligence funds was included in the category.

Other provisions that were classified as inappropriate were special provisions on the Technical Education and Skill Development Authority's (TESDA) use of savings; agrarian reform's condonation of interests, penalties, and surcharges; the trade department's credit mediation services; public utility vehicle modernization program; and the Public Attorneys Office's forensic laboratory division.

With regard to the provision on TESDA's use of savings, Duterte pointed out that under the Constitution, no law shall be passed authorizing any transfer of appropriations, except that for the executive branch, the president may be allowed by law to augment any item in the budget from savings in other items.

"Thus, TESDA may not be granted authority to transfer appropriations on its own, with no need for presidential approval," Duterte said.

With regard to other "inappropriate provisions," the president said they do not relate to particular appropriations in the budget.

Duterte also rejected special provisions on the cash budgeting system of the education department and the Commission on Higher Education. He said agencies belonging to the education sector are supposed to submit budget proposals covering only those activities to be implemented within the calendar year 2021, and not the requirements of the whole academic year considering that the budget covers only the funding requirements for the particular year.

Duterte also subjected several provisions of the budget to conditional implementation to ensure efficient use of public funds and avoid duplication of funding.

They include the special provisions on the Dangerous Drugs Board's collections for drug rehabilitation activities; the health department's national integrated cancer control program; the use of revenues from the golf course operations of military hospitals; and the use of maintenance and other operating expenses of the social welfare department's Inter-Country Adoption Board.

He said some items would be subject to the guidelines to be issued by agencies including the engineering and administrative overhead expenses of the agriculture department; the public works department's pandemic response employment generation program; some Toll Regulatory Board projects; allocations to local government units under "assistance to cities;" support to the barangay development program of the National Task Force to End Local Communist Armed Conflict; the implementation of rice subsidy under the Pantawid Pamilyang Pilipino Program; the grant of transportation and teaching aid allowances under the alternative learning system; and the social welfare department's supplementary feeding program.

Duterte also required the public works and transportation departments to fully exhaust their budgets for the payment of right of way expenses before they avail of unprogrammed appropriations. He also cited the need to implement the National ID System in accordance with the approved work and financial plan of the Philippine Statistics Authority and to ensure its timely completion.

"We remain steadfast to bounce back through the FY (fiscal year) 2021 national budget, amounting to P4.506 trillion. With this budget, we will sustain our current efforts in addressing the impact of the pandemic, especially now with the promise to access to developed vaccines in sight," Duterte said.

"We expect a bumpy road ahead but we will recover as one nation, and we will move forward and finish strongly," he added.

Share
Previous Sheryl: Am I pregnant (daw)?
Next After miscommunication, broader travel ban on 20 territories finally sure