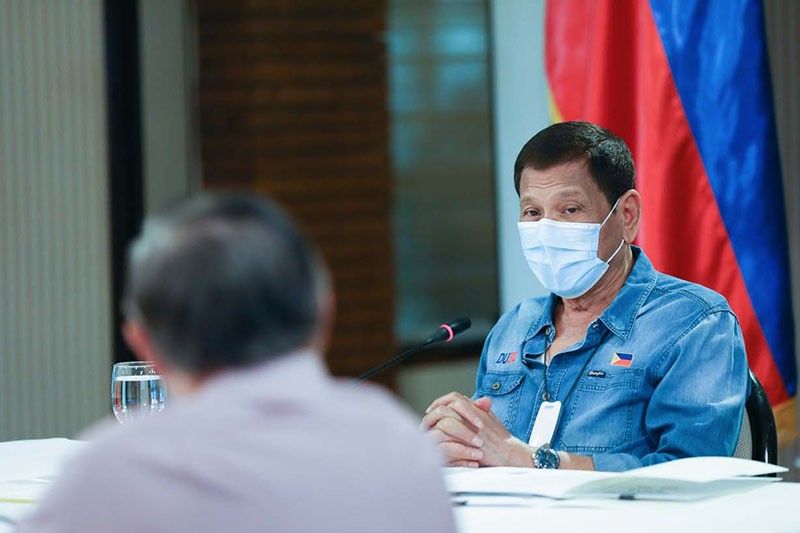 MANILA, Philippines — President Rodrigo Duterte has advised his critics to "pray harder" if they want him to die soon as he ended what he described as his intentional absence from the public eye.

In a pre-recorded address aired last Monday – his first since March 29 – the 76-year-old Duterte spewed scathing remarks against those who questioned his whereabouts and insisted that he remains fit to perform his duties as President.

"If you want me to die early, you must pray harder. Actually what you intend or what you would like to happen is to see me go," Duterte said.

"You want me to go and you are praying for that. In Bisaya…it's called 'manungo (curse).' That manugo is 'I hope you will die.'Now, kindly take a look backwards. How many of you are sick and how many of you are about to die?" he added.

Duterte said he deliberately avoided the public eye in the past few days as some people are asking about his whereabouts.

Duterte's talk to the nation was canceled last week, raising speculations that he was seriously ill but officials maintained that the president was in good condition and never left his residence in Malacañang.

Duterte said there is nothing wrong if he decides to ride on a motorcyle at night or at early morning because it won't cause inconvenience to the public.

"I want to ride on a motorcycle at night. I just need two policemen behind me so nobody will overtake me. That’s all I need. I just want to ride. There's nothing wrong …And to ride at 2 o’clock in the morning, that is not taking the people’s time," the president said.

At a press briefing Tuesday, presidential spokesman Harry Roque said Duterte's latest public address was a proof that the presidnt remains "healthy," "fit" and "looks younger for his age." He also described as "old study" the result of a Social Weather Stations poll suggesting that 65% of Filipinos think the president's state of health is a public matter.

"That is an old study, 2019 or 2020. Nevertheless, under the Constitution, his (Duterte) medical condition can only be released if the illness is serious. As I said yesterday, there is no medical bulletin because the President is not sick and you saw the evidence last night," Roque said.

The president went on to lash at his critics who questioned his absence, saying he was ready to respond to anyone who "disrespects" him.

He chided columnist and former special envoy to China Ramon Tulfo, who had urged him to make a public appearance to quash speculations about his health.

"I swing my golf club and ride a motorcycle because I can do it. Now the problem is you should look into the time I enjoy my hobbies. Mon, it's two o'clock in the morning," Duterte who described Tulfo as a longtime friend, said.

"Mon Tulfo is teasing me…'Where is the president? You know, he might be dead'. I would have told him 'I was just here in Malacañan, sleeping alone. How about you? Who was with you in bed? Do you own that?'" he added.

Duterte said he was not able to go to Davao in the last two weeks but he can always do so because he considers the city his home. He said he missed his daughter's birthday because he had to sign documents related to agriculture.

"You know, the people must know that I am a resident of Davao City. I never pretended to be a resident of Sampaloc or Sta. Ana…And if I want to go home there on reasonable basis, I can because that is my home…After all, the government does not shoulder my airfare so I go home just to be there and come back the following day," Duterte added.

Duterte also assailed jailed opposition Sen. Leila de Lima, who has been critical of the government's handling of the COVID-19 pandemic. De Lima, who is in jail over drug-related charges, previously claimed that "no one is really in charge" when it comes to addressing the health crisis.

"You know it takes two to tango. If you disrespect me, I will also disrespect you. Just like De Lima. It serves you right. Bear it, son of a b****. You disrespected the Philippines with the sale of drugs at the national penitentiary," the president said.

"Now, you keep on yakking that I cannot do it… Did you elect me as president? I got my votes, substantial one, to make me a credible president. It's six million (votes). You were arrested because in your mad desire to be president, you were asking money from everybody. That's the problem with you," he added.

De Lima has been accused of accepting money from convicted drug lords but the senator has denied any involvement in the narcotics trade.

Duterte said he would not have stayed long in his post if he were incometent.

"Will the military allow me to govern if I did not do anything?… We are now enjoying the times of our lives you know singing sometimes…laughing. You (De Lima) are in jail. Bear it. Son of a b****. You did it," the president said, referring to the allegations against de Lima.

"Remember I was still mayor… You were criticizing me about human rights. I told you, 'You better look into your own backyard.' I think you were the (justice) secretary then… You are fighting with ferocity like a wounded animal but you did it," he added.

Duterte went to say that it would be okay if De Lima catches COVID-19 because of her tirades against the administration.

Duterte claimed De Lima was angry with him because he did not allow illegal drugs to flourish in the Philippines.

"If I did not do anything, we would have (become) a narcopolitics state. You cannot do what I have done. You are just looking for an issue."