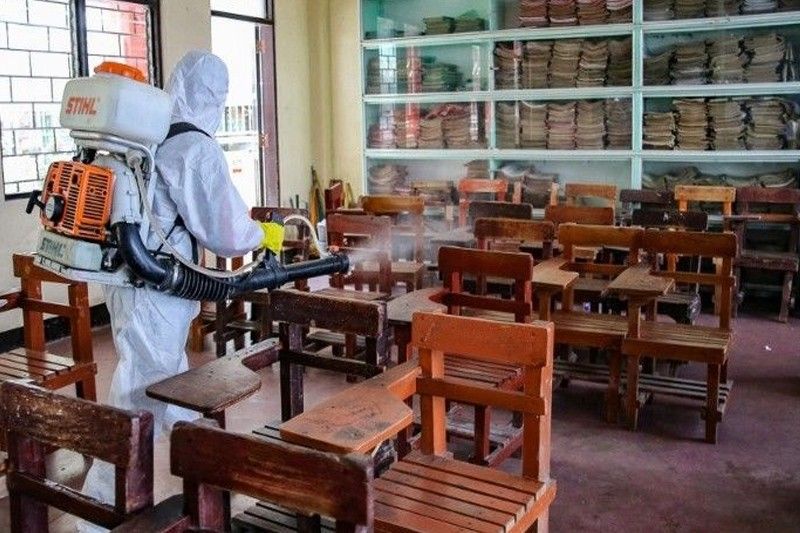 Disinfection of a classroom.

MANILA, Philippines — Amid mounting concerns over a new strain of coronavirus which experts fear to be more contagious than the original, President Rodrigo Duterte will no longer allow the Department of Education to pilot face-to-face classes come January next year.

"I am calling back the order and I will not allow face-to-face classes for children until we are through with this [strain]," Duterte said during a televised meeting with his COVID-19 task force on Satrurday night.

"We have to know the nature of the germ we are confronting. We don't know anything and I cannot take the risk of allowing the children. That would be a disaster actually," he added partially in Filipino.

Duterte on December 14 approved the conduct of a dry run of face-to-face classes in some schools located in areas with low coronavirus risk.

But on Saturday's televised meeting, he said he would order Education Secretary Leonor Briones "to suspend all activities of children, especially…face-to-face classes."

The new variant emerged in the United Kingdom and Prime Minister Boris Johnson has said that it "may be up to 70% more transmissible than the original version of the disease." It has already been detected in other countries such as Rome, Denmark, Netherlands, Australia and most recently in France.

Duterte also noted that it has also been detected in Sabah, Malaysia, which is only a few hours away from Sulu.

On Wednesday, the chief executive ordered the suspension of flights from the UK from December 24 to December 31, joining some 50 other countries who have similarly imposed travel restrictions on the country. — Bella Perez-Rubio with a report from Agence-France Presse