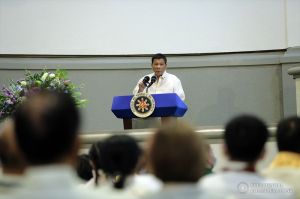 President Rodrigo Roa Duterte delivers his speech during the oath-taking ceremony of the newly elected local government officials of Davao City and members of the House of Representatives at the Sangguniang Panglungsod Building in Davao City on June 27, 2022. RICHARD MADELO/ PRESIDENTIAL PHOTO

(UPDATE) PRESIDENT Rodrigo Duterte often incited violence and ordered police to shoot dead suspects in a drug war that has killed thousands. But analysts say he is unlikely to face charges after he steps down on Thursday, June 30.

Duterte's signature policy to rid the country of drugs has been widely condemned and sparked an international probe into a possible crime against humanity.

But the 77-year-old is still hugely popular among many in the Philippines who support his quick-fix solutions to crime, and he remains a potent political force.

Marcos has backed Duterte's drug war and signaled his government will not cooperate with the International Criminal Court's (ICC) investigation into the killings.

“The election basically decided that there would not be a serious investigation into President Rodrigo Duterte's role in the drug war for the next six years,” said Greg Wyatt, director for business intelligence at PSA Philippines Consultancy.

Duterte had ordered officers to fatally shoot narcotics suspects if their lives were at risk.

He defended the crackdown, saying it had saved families and prevented the Philippines from turning into a “narco-politics state.”

Government data show more than 6,200 people have died in police anti-drug operations since Duterte was swept to power in 2016.

Rights groups say Duterte created a climate of impunity and estimate that tens of thousands have been killed by police, hitmen and vigilantes, even without proof they were involved in drugs.

Only three policemen have been convicted for slaying a drug suspect.

Under pressure from the UN Human Rights Council and the ICC, the government has examined around 300 cases of drug operations that led to deaths.

Justice Secretary Menardo Guevarra told Agence France-Presse in October that a review of 52 cases had cast doubt on the officers' common claim of self-defense.

Charges have been filed in five cases.

Lawyers representing families of victims have vowed to take legal action against Duterte after June 30.

But they admit the odds are stacked against them.

“We are not that hopeful but it's worth a shot,” said Edre Olalia, president of the National Union of Peoples' Lawyers.

Olalia also said it can take years for a case to be resolved in the creaky judicial system as lawyers struggle to gain access to evidence held by police.

A major challenge to mounting a case against Duterte will be the ombudsman he appointed, said jailed Duterte critic and Sen. Leila de Lima.

“His clout with the present ombudsman, the only official authorized to file charges against him in relation to the EJKs (extrajudicial killings), survives even after he leaves office,” de Lima said.

The last hope for many families seeking justice is the ICC, said Carlos Conde, a senior researcher at Human Rights Watch.

ICC judges authorized a full-blown investigation into the anti-narcotics campaign in September, saying it resembled an illegitimate and systematic attack on civilians.

It suspended the probe two months later, after Manila said it was looking into the alleged crimes.

Conde said the government was trying to “hoodwink” the international community, particularly the ICC.

“A lot of what they've been doing is just window dressing, they are just trying to buy time,” he added.

ICC prosecutor Karim Khan announced on Friday that he intended to resume his probe into the drug war “as quickly as possible,” saying Manila's request to defer the investigation was unjustified.

Duterte has refused to cooperate with The Hague-based court, claiming it has no jurisdiction.

He pulled the Philippines out of the ICC in 2019 after it launched a preliminary investigation into his drug crackdown.

Even if the ICC gathers enough evidence to bring a case against Duterte, its rules prevent him from being tried in absentia.

“ICC, I know you're listening, stop the drama that you'll indict me,” Duterte said on Thursday, offering to act as a lawyer for anyone in uniform who shoots dead a criminal after he leaves office.

Another option for justice was an “unofficial truth commission,” said Ruben Carranza, a senior expert at the New York-based International Center for Transitional Justice.

Carranza, who was previously involved in efforts to recover money and assets stolen by the Marcoses, said it would allow families of drug war victims to tell their stories.

“In a country like the Philippines,” he said, “I think it's important to fight for the truth whenever it's possible.”