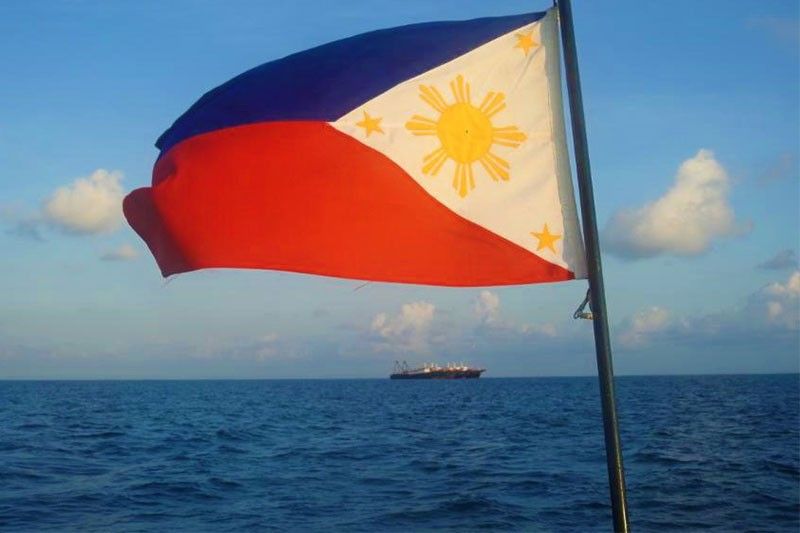 MANILA, Philippines — The Philippines cannot get back parts of the West Philippine Sea that are being occupied by China without a bloodshed, President Rodrigo Duterte said, as he threatened to deploy military ships if Beijing conducts oil drills in the area.

Duterte, who has drawn flak for being silent on China's aggressive actions in disputed areas, expressed doubts that China would leave the West Philippine Sea even if the United Nations compelled it to do so.

"The Chinese government will just give you a finger. You cannot scare them because they firmly believe that it is theirs contrary to our…opinion that it is ours," the president said during a pre-recorded public address last Monday.

"Even if I go there, I said, with (Defense) Secretary (Delfin) Lorenzana, and sail there and ask questions, nothing will happen. They will just answer you. But you know the issue of the West Philippine Sea remains to be a question forever until such time that you know, we can take it back," he added.

Duterte said the occupied areas can only be taken by force but such an option would be costly.

"For me, there is no other way but a war. If we promote a war against China and America, it can be accelerated. But at what cost to us? That is the problem. But we can retake it only by force. There is no way that we can get back what they call Philippine Sea without any bloodshed. That's true," the president said.

"You know the cost of war. And if we go there really to find out and to assert jurisdiction, I said, it would be bloody. It will result in a violence that we cannot maybe win," he added.

It was the first time Duterte talked about the maritime row publicly since hundreds of Chinese ships were seen in Julian Felipe Reef, an area within the Philippines' exclusive economic zone and continental shelf. The Philippines has filed diplomatic protests against the presence of Chinese vessels in the reef but China has insisted that the area is part of what it calls Nansha island.

Duterte noted that the Philippines can only invoke its Mutual Defense Treaty with the US if it is attacked or assaulted.

"It does not include a war that is initiated by us," the president said.

China claims more than 90% of the South China Sea, where more than $5 trillion in ship-borne trade passes through every year, but this is being disputed by the Philippines, Vietnam, Malaysia, Brunei, and Taiwan. In 2016, a Hague-based arbitral tribunal ruled that China's wide-reaching claim has no legal basis but Beijing refuses to recognize the ruling.

Navy ships to be deployed if…

Duterte, who has been accused of adopting a soft stance on China in exchange for aid, said he does not want a quarrel with Beijing but is ready to assert the Philippines' claims if oil drills are conducted in the West Philippine Sea.

"I am addressing myself to the Chinese government. We want to remain friends. We want to share whatever it is. I told you, the Chinese government, I’m not so much interested now in fishing. I don’t think there’s enough fish really to quarrel about. But when we start to mine, when we start to get whatever it is in the bowels of the China Sea, the oil, then by that time, I will send my ships there," the president said.

"I will send my gray ships there to stake a claim. You can be sure of that. If you get the oil, nickel, and precious stones, that would be the time because that is the time that we should act on it," he added, referring to war ships.

Duterte said the recent chasing of a Filipino boat carrying a reporter by a Chinese ship does not merit the deployment of grey ships.

"Ngayon kung habulan lang…maghabulan lang sila diyan, sige bigyan ko sila ng limang Coast Guard. Habol-habolan lang sila diyan, maglaro sila kung sinong mas mabilis (If it is just chasing, I will give them five Coast Guard ships. They can chase each other and see who is faster)," he added, referring to the incident involving a boat that carried ABS-CBN reporter Chiara Zambrano.

Defense Secretary Delfin Lorenzana said nothing is preventing Philippine ships from going to the West Philippine Sea, citing the regular patrols conducted by the Philippine Coast Guard and the Bureau of Fisheries and Aquatic Resources, and the regular resupply missions in the Kalayaan Island Group.

"The fishermen are free to fish. They are not being harassed by the Chinese," the defense chief said.

Duterte said China's "constructive occupation" in the West Philippine Sea happened during the administration of former president Benigno Aquino III, under whose watch the standoff at the Panatag (Scarborough) Shoal happened.

The shoal is a traditional fishing ground off Zambales that is within the Philippine exclusive economic zone but has been under Chinese control since 2012.

Duterte blamed former foreign affairs secretary Albert del Rosario for the loss of the Panatag Shoal, saying the former top diplomat was the one who talked to the Americans. He claimed that the constructive occupation of the West Philippine Sea "was completed by the singular act of China not retreating."

"It's like that under international law. If you retreat, that means, that's not yours. Why did they retreat> Secretary Albert talked to the Americans, he was afraid of war," Duterte said.

"I do not want any quarrel. But in a situation like that, if repeated…in my administration… I won't retreat. If I have a ship there, if the Coast Guard is there, I won't retreat…As Secretary Lorenzana said, we have resupply missions, if they are driven away, I would tell them to stay put," he added.

Duterte also chided retired Supreme Court senior associate justice Antonio Carpio, who has been critical of his administration's handling of the dispute.

"I’ll give you 100 years, you can never get something there, even one glass of water from China. And then you keep sowing intrigues. What do you want? Tell me what to do except your papers, which are worthless," he added.

Duterte also advised Carpio not to join politics, saying the retired magistrate does not know anything about it. Carpio is a lead convenor of 1Sambayan, a coalition that aims to support a single opposition ticket in the 2022 elections.

Share
Previous Talisay thrashes Tabogon to sweep first round of VisMin cagefest
Next NDRRMC: At least two dead, one injured, one missing due to Typhoon Bising

French forces kill IS Sahel jihadist leader wanted by US