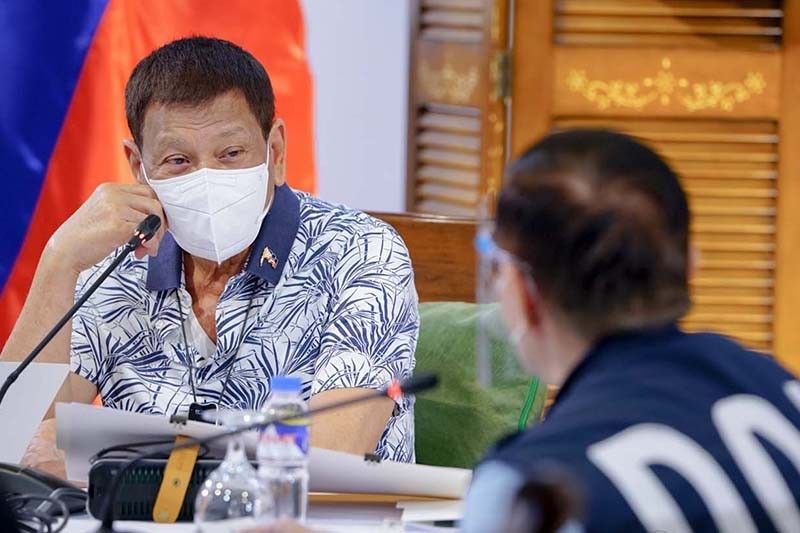 Chief Presidential Legal Counsel Salvador Panelo said the state has the duty to protect and promote the right to health of the people as commanded by the Constitution.

He added that it is imperative for the government to ensure the fulfillment of its "sacred duties" when the nation is faced with a public emergency that directly threatens people's lives like the COVID-19 pandemic.

"It is therefore only logical for the Government to call all hands on deck to adequately respond to the novel challenges spawned by this pandemic," Panelo said in a statement.

"Understandably, when you forestall our health authorities from performing their officially-mandated functions, you not only cripple the efficiency of pandemic response of the government and endanger the lives of the Filipino people, but you also cause a violation of the Constitution in preventing the State to perform its constitutionally-enshrined responsibilities," he added.

Duterte, through Executive Secretary Salvador Medialdea, has ordered executive officials to skip the Senate hearings on the allegedly overpriced procurement of personal protective equipment and face shields by the government and to focus on addressing the pandemic.

In a memorandum issued last Monday, Medialdea said it has become evident that the hearings are conducted "not in aid of legislation but to identify persons to hold accountable for alleged irregularities already punishable under existing laws." The Senate blue ribbon committee, the panel conducting the probe, has stepped into the mandates of other branches of government, and has deprived itself of the only basis to compel attendance to its hearings, the memorandum claimed.

But Panelo insisted that the legislature's power to investigate is not absolute. He added that the law requires that such an investigation must be conducted in aid of legislation or with a view of enacting, amending, or repealing a law.

"The basic tenets on the separation of powers between our three main branches of government demand that each branch maintain and respect the independence of the others, and refrain from encroaching on powers and functions that are constitutionally-granted to the other branches of government," Duterte's chief legal counsel said.

"In this light, the Senate, in arrogating itself the power to prosecute and adjudicate upon controversies or issues that its creation has transgressed the bounds of its mandate and directly interfered with the functions of the Executive and Judicial branches, hence violating the elementary principle of separation of powers," he added.

Panelo said the Senate hearings have been "meandering to the point of practically preventing invited government officials from performing their functions and duties."

"Likewise, not without consequence, the hearings have unfairly cast aspersions upon the integrity of some government officials and employees through mere public repetition of innuendos and unfounded suppositions in violation of the duty to protect witnesses and to treat them with respect," he added.

"If the inquiry of the Senate is truly in aid of legislation, then it is imperative upon them to inform the people of the specific laws which it seeks to create, amend, or repeal. It has not done so."

Panelo also echoed Duterte's view that cases should be filed against government officials, private individuals and institutions involved in corruption or illegal transactions.

"While the executive department is genuinely willing to oblige the Senate in due deference and respect, it cannot continue to do so at the expense of the lives and safety of the Filipino people," Panelo said.

"Faced between the choice of accommodating the whims and caprices of a senatorial despot – who would seek to make the world his stage until kingdom come – and actually performing genuine public service that directly relates to the general welfare of the Filipino people, the choice is obvious," he added.