Share
World·New
In an act of retaliation over criticism of their national politics, Hungary and Poland have threatened to veto the European Union's massive budget, which would provide grants to countries hardest-hit by the pandemic, writes Don Murray.

Meanwhile, politicians from Poland and Hungary have charged that the European Union has been using "Gestapo tactics," that it's trying to flood the continent with 35 million migrants, that it's behaving like "a colonial empire"— and, most importantly, they have threatened to veto a massive and laboriously constructed seven-year budget for Europe worth more than $2.5 trillion Cdn.

This is all contributing to a European Union crisis that comes to a head at the meeting of European government leaders on Dec. 10. 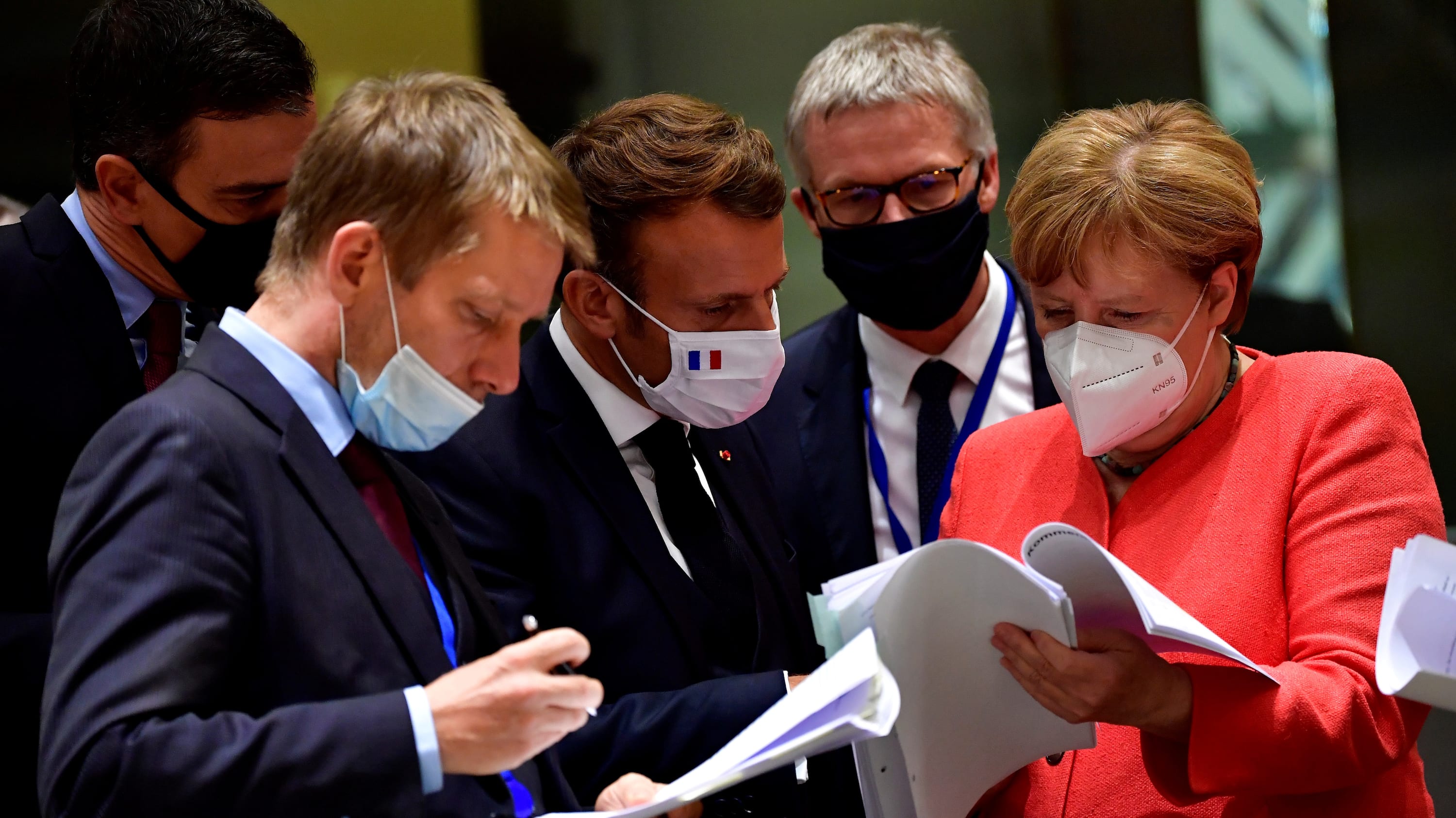 After nearly five days of negotiations, the European Union has reached a trillion-dollar deal to help the bloc's hardest-hit countries recover from COVID-19.3:54

At the heart of it is the principle of rule of law, a principle the EU Commission says Poland and Hungary are abusing. Both countries have just lost cases against the EU in the European Court of Justice.

The first, against Poland, was for "court packing" — that is, forcing judges to take early retirement and then replacing them with governing party loyalists.

The second, against Hungary, condemned it for forcing Central European University out of Hungary because it was based in the U.S. The university was founded and funded by billionaire philanthropist George Soros, and Michael Ignatieff, the author and former leader of Canada's Liberal Party, is its president and rector. Orban's government was suspicious of Soros's push for more liberal and democratic values.

In retaliation for the rulings, Poland and Hungary have invoked EU rules and vetoed the new budget. For good measure, their leaders have flung insults about colonialism and Gestapo tactics at the European Commission in Brussels.

The EU budget determines which countries get how much money from Brussels for the next seven years. Under the EU system, the unanimity of all 27 countries is needed to approve the budget.

This one contains a first — a massive $1.15 trillion rescue fund, of which almost $600 billion will come in the form of grants to European countries hit hardest by the coronavirus.

The grants are key. They are the equivalent of Canada's federal equalization payments to poorer provinces. But for the past 20 years, Germany in particular has resisted a European grant system. It and other northern European countries such as the Netherlands and the Scandinavians insisted on loans, which would be paid back.

No more. With the coronavirus crisis, German Chancellor Angela Merkel made a historic U-turn and helped push through the new system of grants — only for Poland and Hungary to block the whole package in November.

Major European leaders, notably those of France and Germany, are furious. They're floating a plan to approve the budget and rescue money for 25 countries, leaving Poland and Hungary in the lurch.

The rule of law dispute has a direct link to the mass demonstrations by women in Poland, which started in late October and continued for weeks. Their protest was against a Supreme Court ruling banning all abortions except where the life of the mother might be in danger. 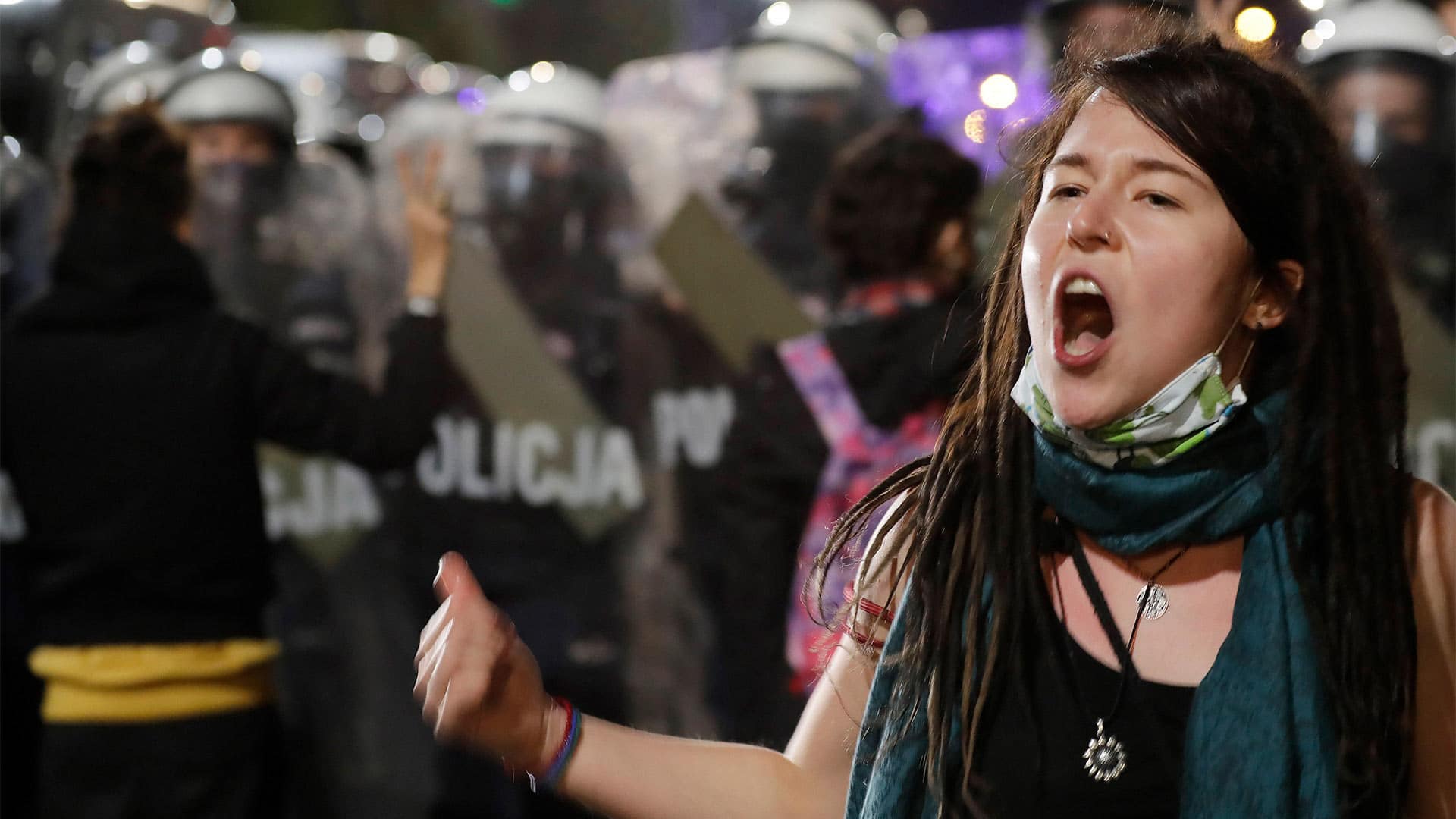 Thousands protest in Poland after abortion is almost entirely banned

Thousands of people protested across Poland for the second day in a row, despite coronavirus restrictions, in response to the top court banning almost all grounds for abortion in the largely Roman Catholic country.2:10

So great were the protests that the Polish government froze the judgment. But the authorities also began legal proceedings against some women protesters for "insulting Catholic worshippers" outside a church.

Brussels says that despite the European Court ruling against court packing, this crisis was evidence that the Polish government has little intention of changing its approach.

Hungary's rule-of-law infractions also involve fraud. The eastern European country is the No. 1 recipient of EU subsidies relative to population. They got more than $7.5 billion in 2019, which accounted for almost 5 per cent of its GDP.

But Hungary is also No. 1 in the EU for suspected misappropriation of those subsidies. The European Anti-Fraud Office has unearthed 43 cases in Hungary, worth almost 4 per cent of the total amount paid to Hungary from 2015 to 2019. That's 10 times the European average.

Hungary's prime minister and strongman, Viktor Orban, is at the centre of a web of family members and associates who have profited greatly from EU money. He has also brought Hungarian courts and the country's media largely to heel. So blatant are his manoeuvres that in early December, French President Emmanuel Macron publicly called Hungary "an authoritarian regime."

Szajer was caught trying to shimmy down a drainpipe and questioned about breaking rigid Belgian rules allowing only small groups indoors during the pandemic.

The news quickly broke and he became a laughingstock. The next day, he resigned as an MP in the European Parliament.

The house-trained Hungarian media tiptoed around Szajer's resignation, although one opposition MP came to the Hungarian parliament and made a mocking speech while brandishing a drainpipe.

To distract from the embarrassment, Orban and his associates retaliated with new attacks on the EU, accusing it of wanting to open the floodgates to let in 35 million migrants. This, to put it politely, is a fiction. Another word for it is "lie."

There was also a new round of scarcely veiled anti-Semitic attacks on Soros, a Hungarian Jew who escaped Nazi death camps during the Second World War by hiding, and who has been a critic of Orban's rule.

For good measure, government officials also attacked George Clooney, accusing the actor of being "a puppet of Soros." Clooney had called Orban an example of "hate and anger."

Underlying all this sound and fury is a fundamental east-west strain.

Hungary and Poland are at the centre of the dispute, but other eastern members, notably Slovenia, have offered public support. Leaders of the Czech Republic are quietly on their side, too. (Andrej Babis, the Czech prime minister, is a billionaire. He, too, is accused of fraud involving EU subsidies to his companies.)

As one Czech political analyst, Jiri Pehe, puts it, all these countries "simply see the EU as a 'milk cow,' where subsidies are there to be spent as we wish."

That attitude flows from the belief that after more than 40 years of communist oppression ending in 1990, these countries are still victims, and are owed sympathy, leeway and money by the richer EU countries.

But there is pushback in both Poland and Hungary. Three former Polish prime ministers and the mayors of Warsaw and Budapest have all denounced the last-minute veto of the EU budget. But these critics are all opposition figures in sharply polarized countries.

For all their rhetoric, it's unlikely Poland and Hungary will carry through on their veto. Poland has already signalled a willingness to compromise. There's too much money at stake. Both countries have been promised billions in new COVID grants.

Furthermore, a recent poll showed that more than 80 per cent of Poles like the EU and its subsidies. But in Poland there's also talk of something called "Polexit." This wouldn't involve slamming the door, like Britain; rather, Poland and others might try to treat the EU like a buffet, signing on to policies they like and refusing others.

Several of these countries did exactly that during the migrant crisis five years ago. They refused outright to take any Syrian refugees — and Brussels did next to nothing about it.

But the buffet or Polexit approach would undermine the EU's foundations. Sooner or later, Brussels will likely try to stop the rot.