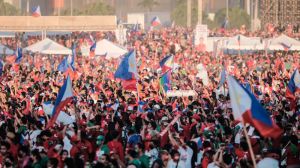 A MAJORITY of Filipinos, at 73 percent, believe that the economy should be the top priority for the incoming administration of President-elect Ferdinand “Bongbong” Marcos Jr., the PUBLiCUS Pahayag Second Quarter survey showed.

This was followed by job generation at 53 percent and education at 32 percent.

As respondents were asked to rank their top three priority issues, the Philippine economy was the top issue with 42 percent.

“Poverty, corruption, inflation and agriculture notched selection shares on or above the 15 percent mark — but well below the 25 percent mark, keeping them in the background,” PUBLiCUS said in a statement.

Moreover, the inability to afford basic needs emerged as the most popular micro or household-level issue among respondents, at 59 percent.

Being a victim of a crime (25 percent) and the inability to afford luxuries (11 percent) were also concerns raised in the household, but of lower priority.

The pollster noted that these issues can be viewed to be “consistent with the distribution of macro-level concerns, more specifically, people are keenly concerned with the economy — and how it relates to their livelihoods.”

The results of the survey have a ±3 percent margin of error.