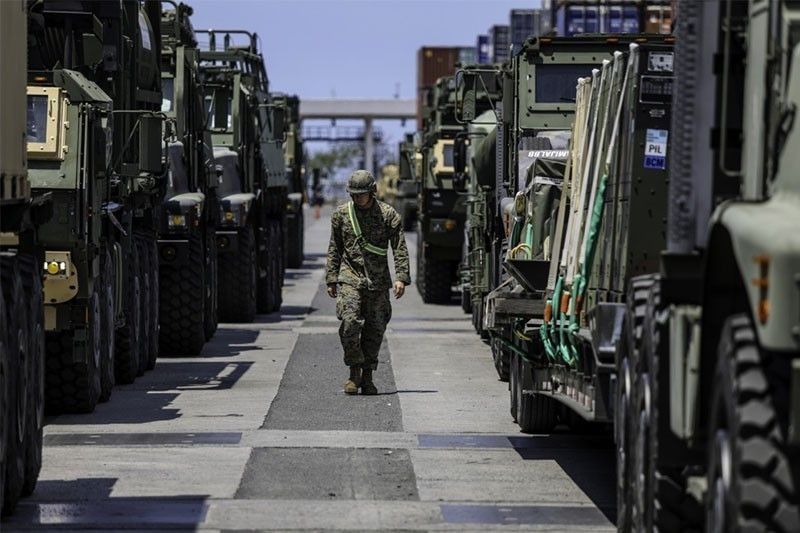 In this Apr. 24, 2019 photo, a US Marine takes accountability for equipment during a maritime prepositioning force onload at Subic Bay.

MANILA, Philippines — There would have been no need to use the Visiting Forces Agreement with the US to secure doses of its COVID-19 vaccines had procurement efforts at home went well, Vice President Leni Robredo said on Sunday.

President Rodrigo Duterte made the threat over the holidays to finally end the decades-long military deal with America if Washington fails to deliver some 20 million doses of its vaccines.

In her weekly radio show, the country's top opposition figure said stirring tensions with other countries come uncalled for, especially with two vaccine candidates — Pfizer and Moderna — coming from the US.

(We don't need to make threats if our program for vaccine procurement is going well. We have a lot of things that we don't need at this point, and one of them is to pick fights without basis. This doesn't help.)

The president's remarks came after the botched negotiations for Pfizer's 10 million doses by this month, along with concerns that it was late into talks for buying vaccines, which had since been denied by officials despite Duterte only allowing advanced payments in November.

As 2020 came into a close, the global race to secure doses in countries' bid to return to normalcy had heightened, with over 12 billion doses now secured per a tracker despite no jabs out yet in the market.

(If we are doing our job well, we will secure the doses. Our conversation now should be on informing people on which stage we are in procurement, where are we falling in line and how many doses are we expecting.)

The Philippines is so far sure of 2.6 million doses of the British-Swedish AstraZeneca from a P600 million-donation of the private sector.

Despite senior administration officials' repeated assurances during the weekly televised coronavirus task force meetings, government has not signed any deals yet with drugmakers.

Its bid to inoculate 24.7 million Filipinos early this year is also facing doubts with the Senate set to hold an investigation when it resumes session on the government's vaccination program.

Senators in particular had been hesitant on Duterte's move to terminate the VFA with the US, which he made in February 2020 after Washington cancelled the visa of his ex-police chief and now Sen. Bato dela Rosa over his role in the bloody anti-drug war.

It went as far as members of the upper chamber, including the Senate leadership, taking the matter to the Supreme Court and asking magistrates to rule if the chief executive has the power to abrogate treaties without Senate concurrence.

Now, as Duterte pushes with his threat anew, lawmakers warned that such could limit the country's options for a vaccine for the COVID-19 that has gripped the country hard.

"[The] 'no vaccine, no VFA' threat upon the US is totally inappropriate, mercenary and lessens the dignity of the Philippines," Sen. Richard Gordon had said.

Malacañang has denied that president's threat is blackmail but is part of an "independent foreign policy" that has seen the Philippines foster ties with non-traditional allies like China and Russia.

The VFA between Manila and Washington was ratified by the Senate in 1999, years after the chamber rejected the extension of US military bases' stay in the Philippines.

It has since been criticized for allowing foreign troops in the country and for keeping the Philippines dependent on the US.

The count remains the second highest in Southeast Asia, next to Indonesia's over 758,000. The glaring difference, however, is Jakarta is already secured of 335 million doses, while Manila is still finalizing talks.