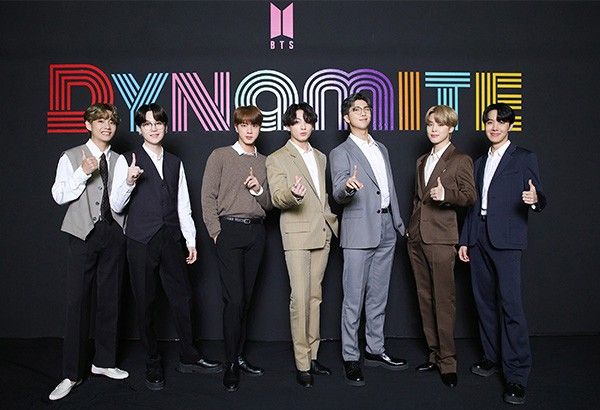 MANILA, Philippines — Known ARMY (BTS fans) Lea Salonga and Liza Soberano showed their support for the Korean group for the Billboard Music Awards set for May 23.

"I'm voting for @BTS_twt for #BBMAsTopSocial," wrote Lea on May 13.

I'm voting for @BTS_twt for #BBMAsTopSocial

Liza, meanwhile, shared how she missed the group and hoped that they will win the BBMA's Top Social category.

Lea has been vocal about her admiration for the boy group. In February, she revealed that BTS "helped save my mental health" during her #AskMissLea Twitter party.

Liza, on the other hand, is another famous fangirl who follows the group. She even did a review of the boy's Grammy-nominated song "Dynamite" on her YouTube channel.

Other stars who are supporting the Korean group are Bea Binene and Jed Madela.

Bea regularly posts on her Twitter, where fans can vote for their favorite acts daily by using the official hashtag #BBMAsTopSocial and tagging their preferred nominated artist. Voting closes on May 22.

The Top Social category at the BBMAs has been gathering steam on Twitter where fans of nominated artists have been zealously showing their support.

The other nominated artists are Ariana Grande, Blackpink, Seventeen, and SB19, the latter the only Filipino act to be nominated at this year's BBMAs.

On May 12, the phrases "SA BTS ANG BOTO KO" and "Iwagayway Ang Watawat" competed for top spot on Twitter Philippines.

Many of those who wrote "SA BTS ANG BOTO KO" said that the group helped them cope with their mental health situation.

"ONE THING IS FOR SURE, BTS SAVED MY MENTAL HEALTH AND I KNOW A LOT OF YOU CAN RELATE (purple heart emoji). SA BTS ANG BOTO KO! PAPER AWARD IS OURS! LET'S GO 5-YEAR WIN STREAK! I'm voting for @BTS_twt for #BBMAsTopSocial. PLS RT," wrote @unraveluniverse. As of press time, it has 3,153 likes and 2,493 retweets.

Another one wrote about being a Filipino Army, the name of the Filipino BTS fandom.

"I am a Filipino Army, but voting BTS doesn't make me less as a filipino. I vote the group who made me happy and healed my heart during my darkest times and who thought (sic) me to love myself. SA BTS ANG BOTO KO. I am voting @BTS_twt for #BBMAsTopSocial. RETWEET SO YOU CAN VOTE TOO (purple heart emoji)," wrote @bts_about.

The phrase "IWAGAYWAY ANG WATAWAT," meanwhile, was mostly used by those who tweeted their support for SB19. It is part of the lyrics of the group's latest single "What?" from their upcoming sophomore album.

Another one hopes for the rise of P-pop in the international music scene. "Someday P-POP WILL RISE. Our economy will rise, our music industry will (be) known worldwide and I'm the one who proudly to (sic) say I'm proud to be Pinoy (Philippine flag). Ansarap sa feeling na natutulungan ko ang bansa ko sa ganitong bagay. So soft. IWAGAYWAY ANG WATAWAT @SB19Official #SB19," wrote Marjohn Humiwat.