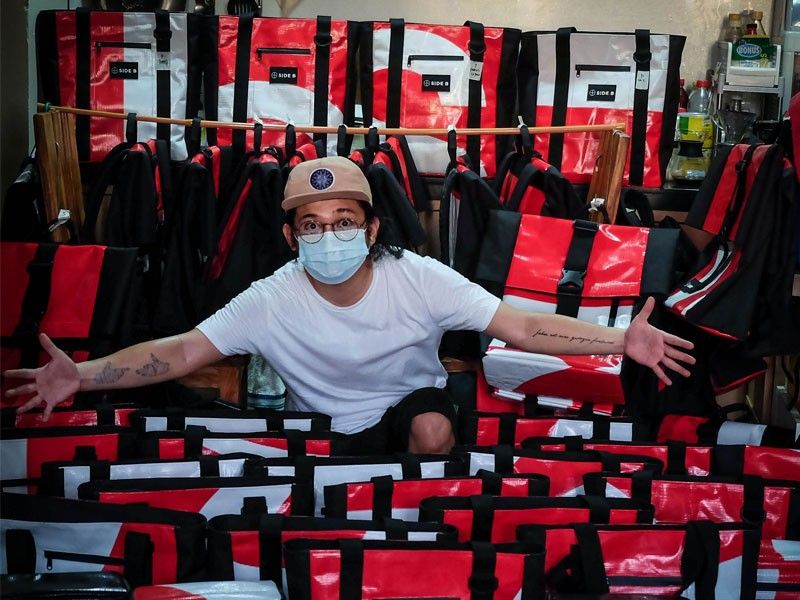 MANILA, Philippines – Former Ateneo Blue Eaglet Stu Balmaceda has channeled two aspects of his being a point guard into his next career — being a nice alternative or backup and being creative.

When he was playing for Ateneo back then — first backing up Carlo Medina when they won a UAAP Juniors title and later on Juami Tiongson and Kiefer Ravena — he was the alternate. “A Side B,” he puts it succinctly with a laugh.

“Side B” is the name of Balmaceda’s upcycled brand of bags in which he makes use of discarded tarps and other materials in creating a line of backpacks, bicycle handlebar bags and other mobile containers. PBA player Frank Golla of Blackwater with one of Balmaceda's bags.

“I'm not a hardcore eco warrior, but I do want to contribute to the cause of helping the environment through simple ways,” explained Balmaceda. “This is how I can and how I can inspire others to do so —say, a bag at time or turning ‘trash into treasure’ by looking at things from a different side. People use bags and they need something durable (the pieces being stylish is a bonus), most especially here in the Philippines. Plus, we have a lot of surplus ‘waste’ materials we can use and so that's where Side B comes in.”

Previously, Balmaceda worked for an advertising agency (doing both copy and design) and did freelance work where he painted the interiors of restaurant. He also spent some time building houses for the poor.

“Why am I doing this,” he reflected. “You know how we always want to pursue something meaningful and impactful? I've been there before when I helped build houses for the displaced, and I'm still on that track, but if I can make it cooler or something more creative, then why not? It's also an effective way for me to channel my creativity.”

“I had this idea for years and I might as well commit to it since I already laid out most of the plans way back. Right now, I’m a one-man show because I do everything from designing, sourcing, purchasing, cutting and cleaning the tarps, picking up the bags, creating content, and everything else. However, I owe a lot to close friends and my family for supporting and helping me. I ask friends to model, to give feedback, to share posts and stories online, and I just know that I wouldn't be here without them.” It has been almost a month since Balmaceda launched Side B (May 4) and the reception's been overwhelming. The first collection had three designs with 24 pieces each and they sold out in a week and a week-and-a-half.

Summed up the former Ateneo player, “It's fulfilling but I know there's still so much more to improve on and I can only hope that things can only get better. The goal is to really turn surplus waste, like tarps, that have already served its purpose but can still be transformed into something useful for people. In the next phases, I aim to use a different type of ‘waste’ material but we'll get to that next time.”

As much as Balmaceda loved the game of basketball and he wanted to play seniors ball with the Blue Eagles, he knew that UAAP Juniors hoops was good for him.

“As a point guard you have to see the floor well. And you should also be able to see beyond it as well.”