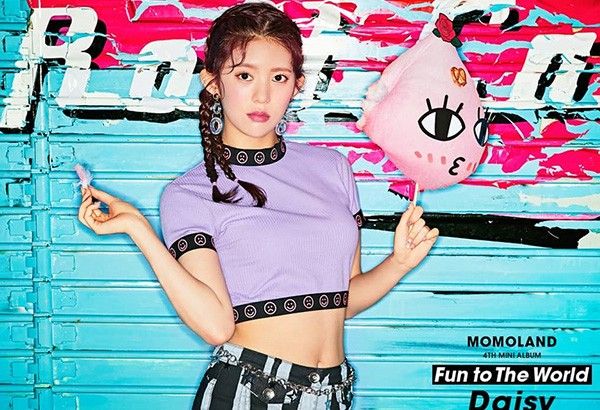 Daisy was part of the 2016 reality show "Finding Momoland" that created MOMOLAND, where she got eliminated but was signed by MLD Entertainment the following year to be part of the K-pop group. Since then, Daisy and her girl group made iconic songs such as "BBoom BBoom" and "Baam."

The reality show’s winners were Hyebin, Yeonwoo, JooE, Ahin and Nancy, making up the original members of the girl group. In 2017, they become a nine-piece group when Daisy and Taeha were signed.

In her 2020 bombshell interview with KBS News, Daisy talked about what went on during her hiatus, including how her agency forced her to go on a break. When she decided to finally terminate her contract, MLD Entertainment demanded a settlement fee of 1 billion won (approximately 840,000 USD). She also revealed how the reality show "Finding Momoland" was rigged from the beginning, and that the pre-selected members were forced to pay the production costs.

According to Daisy, MLD Entertainment withheld part of her earnings to cover one-tenth of "Finding Momoland’s" total production cost amounting to 660 million won. Taking matters into her own hands, Daisy filed a lawsuit against her former agency noting that it’s not fair since the reality show happened five months before she officially signed an exclusive contract to join MOMOLAND, to which MLD Entertainment responded, “This is a common practice in the entertainment industry.”

Nonetheless, after almost a year of legal battle, the court has ruled in favor of Daisy, explaining that “Unless otherwise specified, the contract is effective from the date on which it is established. The phrase ‘before debut’ in the contract means that it begins from the date of signing the exclusive contract. There’s no clear evidence to say it’s a practice in the entertainment industry.”

Naturally, MLD Entertainment is not taking this lightly and has filed an appeal to review the case further.

Share
Previous Morikawa, Thomas, Schauffele eye winning start in The Cup @ Summit golf tiff
Next These Quebec nurses are willing to sacrifice their careers to avoid getting COVID-19 shots