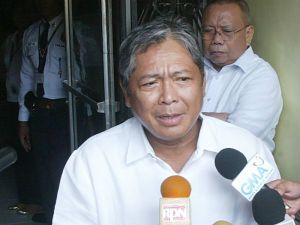 Bautista, an accountant, worked in the country's flagship Philippine Airlines (PAL) for 25 years and was its president for a combined 13 years before retiring for the second time in 2019.

Tugade was initially rumored to be in the running for the DoTr post, but groups representing transport workers were against his re-appointment.

The National Public Transport Coalition said the transport sector was the hardest hit by the Covid pandemic and continues to be crippled by the spike in fuel prices.

The coalition said they are also the most neglected sector and their concerns have not been addressed by Tugade.

Chavez, whom President Rodrigo Duterte appointed to the same post in 2017, was instrumental in securing the National Economic and Development Authority Board's approval for the Metro Manila Subway, Philippine National Railways (PNR) Manila to Calamba, PNR Manila to Bicol, and the Tagum-Davao-Digos Mindanao rail projects.

Chavez was also credited for overseeing the interconnection of the LRT Line 1 in Monumento, Caloocan City, to MRT-3 in North EDSA, Quezon City, ensuring seamless travel for train passengers.

Before working in the transport sector, Chavez was assistant general manager for planning of the Metropolitan Manila Development Authority, chairman of the National Youth Commission, and youth sector representative in the 9th Congress.

Veteran journalist and lawyer Cheloy Garafil was nominated by Marcos as the next chairman of the Land Transportation Franchising and Regulatory Board (LTFRB).

Garafil, a service director at the Committee on Rules of the House of Representatives, was a prosecutor for the Department of Justice and state solicitor for the Office of the Solicitor General.

She was a media practitioner for over a decade and worked in various media organizations such as the Philippine Daily Globe, Central News Agency, the Associated Press and Malaya.

Garafil has a master's degree in National Security Administration from the National Defense College and is a Philippine Air Force reservist with the rank of lieutenant colonel.

Rounding up Marcos' nominees for the transport cluster is Christopher “Chet” Pastrana, who will be the general manager of the Philippine Ports Authority (PPA).

Pastrana brings with him decades of experience in various aspects of aviation, logistics and public maritime transport.

Graduated with a Bachelor of Science in Agricultural Business from the University of the Philippines Los Baños in 1987, Pastrana is currently the president and chief executive officer of CAPP Industries, a supply and logistics conglomerate.

He is also the chairman of Archipelago Philippines Ferries Corp., which operates FasCat ferries.

Appointed as Labor secretary by Duterte in 2016, Bello has spent decades in public service and has held various positions, including acting Justice secretary and solicitor general in 1998 during the term of President Fidel Ramos.

Bello was appointed Cabinet secretary by former president Gloria Macapagal Arroyo from 2004 to 2010 and was a party-list representative from 2013 to 2016.

Nograles was among the Duterte ad-interim appointees that were bypassed this month for lack of quorum by the Commission on Appointments.

Nograles, a lawyer, was Davao City's first district representative for eight years before Duterte appointed him to various posts in the executive branch.

“Bello and Nograles join a growing pool of officials retained from the Duterte administration by President-elect Marcos in his bid to select officials with proven track records who will help in nation-building,” Cruz-Angeles said.

In a statement, Nograles thanked Marcos “for his trust and confidence.”

“I am very excited to return to the Civil Service Commission and lead it into the better normal, together with its committed and dedicated public servants,” he said.