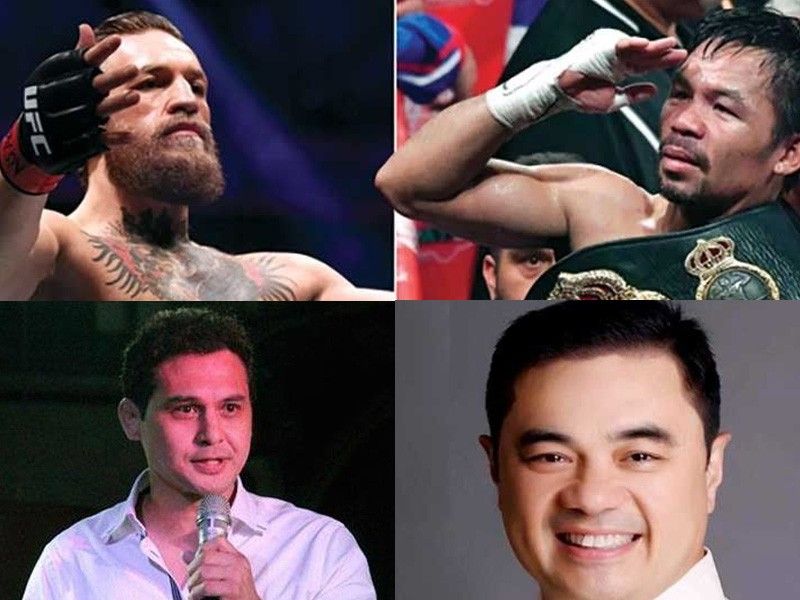 Known for being a taekwondo superstar since the mid 80s, Del Rosario believes the defending World Boxing Association welterweight champion would be facing a very durable McGregor, a two-weight division champion in the UFC.

“Senator always delivers an exciting fight every time he steps in the ring. McGregor is a UFC champion and also a good striker so I think it will be an exciting fight,” said Del Rosario, adding excitement in witnessing the reaction of McGregor when he faces our very own Pacquiao.

“I would love to see how McGregor will compare his experience with unbeaten Floyd Mayweather Jr. to Pacquiao. I would like to hear from him who’s the powerful puncher? Who’s the heavy-hitter and who’s the toughest opponent? So I think this will be an exciting bout.”

For his part, Aguilar, the Universal Reality Combat Championships (URCC) founder, said the 42-year-old Pacquiao would be fighting the Irish McGregor not only for himself but for his people.

“Pacquiao really loves to bring excitement to the Filipinos,” he said.

“It is, as everyone will still watch it and why is it any different when Mayweather did it? Sen. Manny has been proven to be one of the most selfless and generous people in the world,” added Aguilar — also the Wrestling Association of the Philippines president.

“The more money he makes in an honest matter by the way, which is a rarity nowadays, the better for a lot of people who he sincerely helps. He is always blessed because he has a good heart and works harder than everyone else,” he said.

A Pacquiao-McGregor mega bout is seen to uplift the spirits of fight fans around the world, especially in these trying times.

“Senator MP wants to unite all the boxing and MMA fans around the world in this upcoming fight,” said Pacquiao’s special assistant Jayke Joson, assuring both the eight-division world champion and the notorious MMA fighter in the world will come to fight and not run.

“He [Pacquiao] is preparing for this fight a long time ago to satisfy all the fans.”

Pacquiao said he would donate a significant portion of his purse from the McGregor fight to Filipinos, particularly those affected by the COVID-19 pandemic.

“It is a good strategy for Pacquiao because everybody is craving to watch him fight again,” said Sangiao, who trains former One Championship lightweight titleholder Eduard Folayang, strawweight champion Joshua Pacio and One former bantamweight champion Kevin Belingon, among others.

“On McGregor, he really knows how to sell his fight too. It’s going to be a blockbuster fight for sure.”