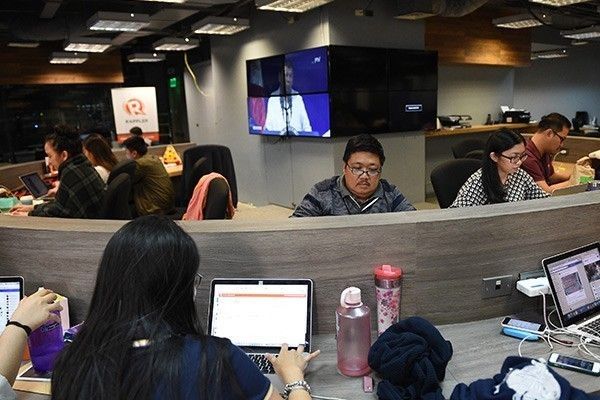 MANILA, Philippines — A YouTube video claims that the license of online news site Rappler, a newsroom that has has borne the brunt of President Rodrigo Duterte's rants, has been revoked after the company's lawyer gave an update on the case pending before the Court of Appeals.

RATING: This is misleading.

What did the video say?

The video claimed that Ressa and her company are reaping "karma" for "spreading false information or fake news against the government" allegedly in an attempt to divide the Filipino people. The video’s narrator read a CNN Philippines article with the headline "SEC stands by decision to revoke Rappler’s license" published on November 22.

The article quoted Francis Lim, lawyer of Ressa and Rappler, who confirmed that the Securities and Exchange Commission submitted its report to the Court of Appeals saying that Omidyar’s donation of financial instruments to Rappler has "no legal effect."

The case stemmed from SEC’s order to cancel the certificate of incorporation of the online news site and Omidyar’s PDR — a financial instrument that gives foreign investors passive economic interest in a Philippine company — in January 2018. The regulatory body held that the company allegedly violated the constitutional and statutory Foreign Equity Restriction in Mass Media.

Rappler appealed the SEC ruling before the Court of Appeals, which ordered the regulatory body to look into the effects of Omidyar’s donation.

But, according to Lim’s latest update, the SEC filed its report without seeking comment from them. They also filed an appeal before the SEC panel on its report.

In the article that the video quoted, CNN Philippines stressed that Lim had clarified that the SEC ruling has yet to take effect as the appeals court would decide on upholding the regulatory body’s finding.

"It depends on how the [CA] views the SEC decision upholding the revocation, whether it’s already final and therefore cannot be revisited by the same division of the Court of Appeals," Lim said. The lawyer was also quoted in other media reports explaining the same.

Rappler also continues to operate as an online news site.

The SEC case was the first of the legal suits that Rappler continues to face since the start of President Rodrigo Duterte’s administration. Ressa has also faced ten warrants and one cyberlibel conviction in recent years.

Seven of these cases remain pending before several courts.

The SEC order, handed down in January 2018, was preceded by Duterte’s claim that the media company is owned by foreigners and should be investigated.

Duterte has also repeatedly lambasted media deemed critical of his administration. The Congress, filled with the president’s allies, also blocked the renewal of ABS-CBN’s franchise.

The same report however said: “Distrust in news brands has declined except for Rappler, which government supporters continue to attack.”

Why did we fact-check it?

Two days since the video was uploaded, it had been viewed 44,227 times and earned 538 comments. The video channel, which was flagged by other fact-checkers for sharing false information, has 281,000 subscribers.

As the Philippines prepares for the 2022 polls, more than 300 journalists have committed to fact-based coverage of the 2022 elections. Members of the Philippine media earlier this year committed "to provide accurate, reliable and essential information that will empower voters and encourage public discussion and debate."

The media plays an important role in the elections, as emphasized by the US Embassy in the Philippines in a September 2021 report of ABS-CBN report.

John Groch of the US Embassy public affairs section recalled that in the 2020 polls in America, there were "efforts to provide correct and transparent information" that "helped [stabilize]" the US democratic system.

Berit Ress-Andersen, chairwoman of the Norwegian Nobel Committee, said Ressa and Muratov "are representatives of all journalists who stand up for [freedom of expression] in a world in which democracy and freedom of the press face increasingly adverse conditions."

What type of misinformation is this?

The statement in the flagged video is an example of a misleading claim.

This classification of misinformation includes posts that can make use of genuine statements and media, such as the SEC upholding its earlier findings on Rappler, but are used to push a false narrative. — Kristine Joy Patag

Have a claim you want fact-checked? Reach out to us at editor@philstar.com.