MANILA, Philippines — Vice President Leni Robredo on Sunday slammed as fake news two photos claiming that she had photos taken of herself selling fish and that her supporters violated social distancing protocols at a rally.

CLAIM: One photo shared by Robredo supposedly shows a massive crowd of her supporters packing a bridge and standing shoulder-to-shoulder.

Fact check: Comelec has not disqualified Robredo from 2022 polls

Another photograph shows Robredo standing behind a fish stall at a wet market supposedly selling fish.

RATING: These are fake.

What the posts said

"Caravan of the Leni mob," one Rex Brazil wrote in a post with the image of the supposed caravan.

"I'm suddenly nervous because of the number of Leni supporters," a page called Bbmforever wrote in Filipino with laughing faces.

"You're running for president. Is that what a president does? Selling fish? Is your father a fisherman?" one Tom Berenguer wrote with the image of Robredo supposedly selling fish.

"What is that, are we just full of optics now? Do you not want to speak about your plans for the country because you always trip on your words when you talk?" What the photos left out

A quick Google reverse image search shows that the original unedited photograph was actually taken in 2018 by one Ailyn Shi for YouScoop, the citizen journalism arm of GMA News Online.

It shows a crowd of devotees packing the two lanes of Jones Bridge in Manila during the Traslacion, the annual procession of the image of the Black Nazarene.

Separate photographs from ABS-CBN News show the same scene from a different angle.

The other photo was ripped from an article on GMA News Online's Filipino arm Balitambayan reporting on the rising prices of galunggong amid the pandemic. 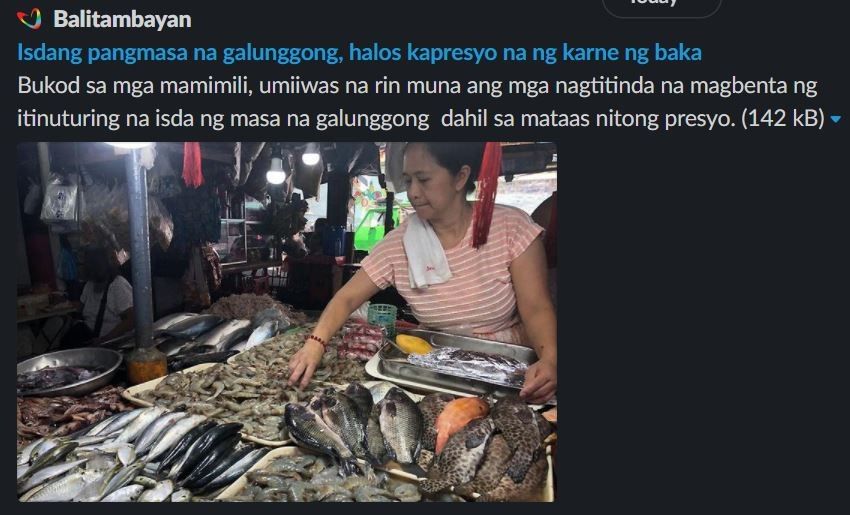 There are also no official news, statements, or social media posts from news outlets and other reputable sources that prove Leni Robredo visited a market just to take a picture while selling fish.

The Office of the Vice President's Media Affairs Division has also not included the photo as part of any press releases sent to media in its press corps group chat or its official mailing list.

"[Let us] love radically especially since it's a Sunday. But this is fake news and the photoshopping is bad," the Vice President wrote in Filipino on her personal Facebook account.

"Obviously done to put us in a bad light. Let's not be shaken. Let us report posts like these."

Robredo's campaign and supporters have held well-documented caravans around the country that have drawn thousands. Some supporters initiated feeding programs and held street dance parties.

Amid her vocal criticism of the Duterte administration, and now her bid for the presidency, Robredo has long been the target of disinformation by pro-administration accounts on social media.

Earlier, pro-administration accounts posted content claiming that the Commission on Elections had confirmed that she had been disqualified, supposedly due to a crowdfunding initiative by her team.

The posts were meant to imply that Robredo's base of supporters was violating social distancing protocols, while the "market" photo was meant to claim that Robredo was painting a false picture of herself as being close to the masses.

The Department of the Interior and Local Government has reminded political parties, organizations, and their supporters that political rallies are still prohibited.

"Political rallies are still banned. It is not yet the campaign period. We have been seeing candidates, both national and local, staging political rallies here and there which gather hundreds if not thousands of people. The pandemic is not over yet. It is still coming. the Omicron variant,” Interior Secretary Eduardo Año said in a statement earlier this week in mixed Filipino and English.

"We cannot put our guard down. The Omicron variant has already reached many countries and it’s only a matter of time before it reaches us," he also said.

Año in his statement said that only caravans and motorcades were given the green light because there is physical distancing and these are usually held for a limited time only.

They are also held in open areas where the possibility of the transmission of the coronavirus is small, he said.

Why does this matter?

According to the Commission on Elections, the official campaign period begins on February 8, 2022.

These posts are an example of manipulated content, where genuine content is edited, altered, or doctored to forward a different narrative.

— Franco Luna with a report from The STAR

Have a claim you want fact-checked? Reach out to us at editor@philstar.com.

Share
Previous You Can Now Rent the ‘Home Alone’ House on Airbnb!
Next Why employers may need to bend toward a more flexible future to stay competitive