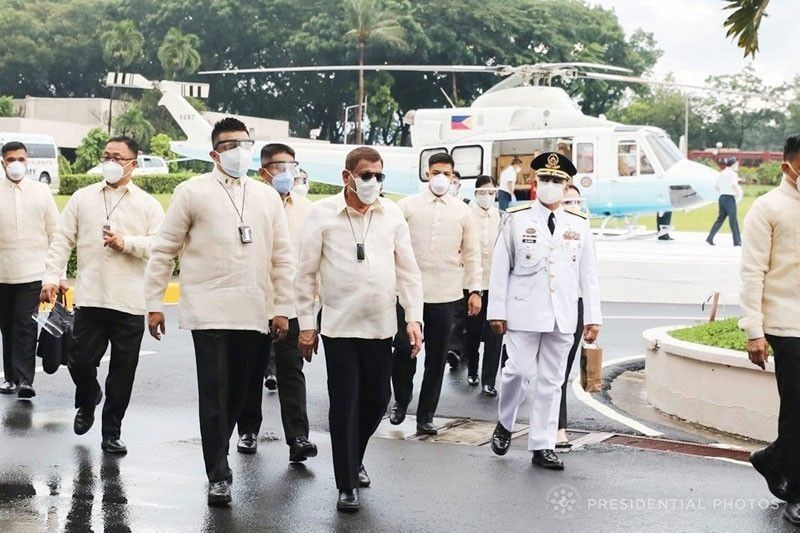 President Duterte is escorted by the Presidential Security Group during his arrival at the Batasang Pambansa for his State of the Nation Address on July 27, 2020. The AFP has confirmed that members of the PSG have been given vaccines ‘to ensure that the President is safe from all threats, including COVID-19.’

MANILA, Philippines — The head of the Food and Drug Administration has lamented the seeming lack of appreciation for the agency's efforts in regulating COVID-19 vaccines after the administration went against its own regulator and inoculated select military and security details of the president.

The administration is facing scrutiny from the public anew over its vaccination efforts, as it continues to defend the move and officials privy to the matter refuse to give more details — something that could stand to undermine the investigation and blur the chances of holding someone responsible.

No vaccine has so far been approved by the FDA, as apart from Pfizer, no other drugmaker has applied yet for emergency use authorization, a move that President Rodrigo Duterte only allowed in November.

Questions as to how the Sinopharm doses were slipped inside the country, including how many had made its way through borders, continue to linger over the incident.

While the president has not commented on the matter, despite him revealing this himself over the weekend, Malacañang has since sought to bury the issue, telling the public to "just accept" that some had already been vaccinated.

BGen. Jesus Durante, chief of the president's security group, admitted Wednesday on live television that they inoculated themselves with the Sinopharm, saying instructions had so far been easy to follow.

For this, Domingo warned of the repercussions of conducting vaccinations without having medical experts to do it.

"Everything could go wrong," he said. "If you don't know where to inject it you could hit a nerve. You could hit a blood vessel [or] injure a person."

He added in Filipino: "We tend to believe that these things are only simple, but even us, we study these before doing it to make sure it's done in the safest and most effective possible way."

It remains unclear if anyone would be indeed held responsible for the incident despite ongoing investigations. But also on Wednesday, Defense Secretary Delfin Lorenzana called the Sinopharm vaccines as smuggled, though he has said that it was justified.

Apart from smuggling charges, the country's law on counterfeit drugs also prohibit the distribution of unregulated medicines, but it stops short of penalizing those who receive it.

As the year comes to a close, doubts continue to hound the Duterte administration's vaccination program for the deadly virus that has gripped the country hard.

Apart from the Sinopharm mess, it is facing furor over seemingly being late into talks for securing doses amid a global race, where over 11 billion doses are already sure for other nations.

Its plan to procure 25 million doses of another Chinese-made vaccine Sinovac has also been criticized, after it was found to be only at 50% effective and yet the second most expensive in the vaccines being eyed.