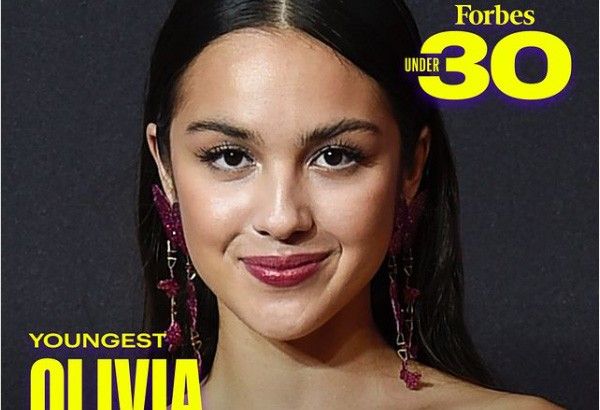 Filipino-American pop singer Olivia Rodrigo's song "driver's license" is the most-streamed song of 2021 on Spotify, racking up over 1.1 billion streams.

Another song of hers, "good 4 u," ranked fourth on the same list. Meanwhile, her album "Sour" which includes both songs, was the most-streamed album globally.

Following Rodrigo on Spotify's most-streamed song list was rapper Lil Nas X’s “Montero (Call Me By Your Name)”, "STAY (with Justin Bieber)" by The Kid LAROI, and Dua Lipa's "Levitating."

Rodrigo thanked her fans on Instagram for their support. "Thank [you] guys for all the love this year… Means so much to me that [people] listen to the songs I write. So grateful."

Spotify wasn't the only music streamer where Rodrigo's songs shone, with "driver's license" and "good 4 u" taking the first two spots of the Top 100 Most-Read Lyrics on Apple Music.

"driver's license" was second in Apple Music's Most Streamed Songs behind Korean super group BTS' "Dynamite", which came out last year. Her hit song "good for u" was seventh.

The year-end streaming achievements were icing on the cake for Rodrigo after garnering seven nominations at the 2022 Grammys, including the Big 4 categories where she will again face the likes of Lil Nas X, Justin Bieber, and Doja Cat.

"Fewer artists have had a bigger 2021 than teenage pop supestara Olivia Rodrigo. The Disney actress's first album 'Sour' solidified its spot as America's favorite breakup album, debuting at No.1 on the Billboard 200," Forbes wrote of 18-year-old American with Filipino roots.

Spotify unveiled the top artists, albums, songs, playlists, and podcasts that defined how more than 381 million people around the world listened and discovered audio in 2021.

If 2020 was the year that flipped the world on its head, 2021 was the year that we got used to seeing things upside down. For Filipinos, this year meant discovering new content ranging from music tracks to podcasts, unique to each of us. Spotify 2021 Wrapped celebrates the millions of quirky and wonderful ways to listen, as well as look back at how audio helped listeners discover new favorites–while creators soundtracked the world around us.

This year, Filipino artists are out in force as Spotify Wrapped shows that Filipinos are listening to local artists, music, and podcasts, as well as musicians with Filipino roots more than ever.

Breakout star and Spotify RADAR Philippines artist Zack Tabudlo’s “Binibini” took the top spot for being the Most Streamed Song in the country in 2021. Global artists with Filipino roots also clinched two of the top five spots with Olivia Rodrigo’s “drivers license” (#3) and Bruno Mars’ “Leave the Door Open” (#5). Coming in second is K-Pop phenomenon BTS’ “Butter” and Pink Sweat$’s At My Worst” at number four.

For the second year in a row, Ben&Ben emerged as the Philippines’ Top Streamed Local Artist, followed by Moira Dela Torre, Skusta Clee, Zack Tabudlo, and rising star, Arthur Nery in the top five. Meanwhile, Arthur Nery’s Letters Never Sent is the Top Local Album in the country, followed by Eraserheads’ Anthology, a compilation of the band’s greatest hits.

Pinoys’ appetite for love songs was further confirmed by Zack Tabudlo’s “Binibini” and “Nangangamba” nabbing the first and second spots as the Most Repeated Local Songs in the country. Pinoy Hip-Hop’s continued emergence also shines with the top five being rounded out by PDL, Flow G, Skusta Clee, and Yuridope’s “Pauwi Nako”, and Skusta Clee’s “Dance With You”, as well as “Lagi”.

Aside from OPM, K-Pop took the Philippines by storm with BTS emerging as the Top Streamed K-Pop Artist in the country followed by TWICE, BLACKPINK, IU, and SEVENTEEN in riding the Korean Wave in the Philippines.

Podcasts continue to gain traction in the Philippines, providing an eyes-up, ears-open listening experience for many Filipinos. This year, Pinoy creators took up the Top Five Most Popular Podcasts in the Philippines. Wellness podcasts are a hit with skypodcast and Sleeping Pill with Inka taking up the top two spots. Advice-type of conversations also resonate locally with Dear MOR: The Podcast, Boiling Water PH, and SUPERHUMAN with Will Dasovich, rounding the top five local podcasts.

To help users commemorate the ways they have embraced the unknown and defined their own “normal”, Spotify has releases new personalized Wrapped features, including:


• 2021: The Movie – A video montage of your top played songs paired with iconic scenes from cinema in a movie that’s all about you.

• Your Audio Aura – A creative mashup of your mood, tempo, liveliness, and even artist/album art to visualize your audio “aura.”

• Playing Cards – An interactive data-based game of truth and lie to discover how well you know your own audio habits and challenge a friend.

• Wrapped 2021: Blend – Tapping into the new Blend feature launched this year, see how your 2021 music taste matches up with friends, where you can stream your blended playlist.

Spotify's users will be able to access and share their personalized Listener Wrapped experiences with exciting new features, which provides a deep dive into the music and podcasts that defined their year.

A snapshot of Spotify Wrapped 2021 Top Philippines and Global results can be found below. Also, check out this year’s Spotify Philippines Wrapped playlists featuring top artists and tracks of 2021.

4. Dance With You, Skusta Clee and Yuri Dope

5. SUPERHUMAN with Will Dasovich