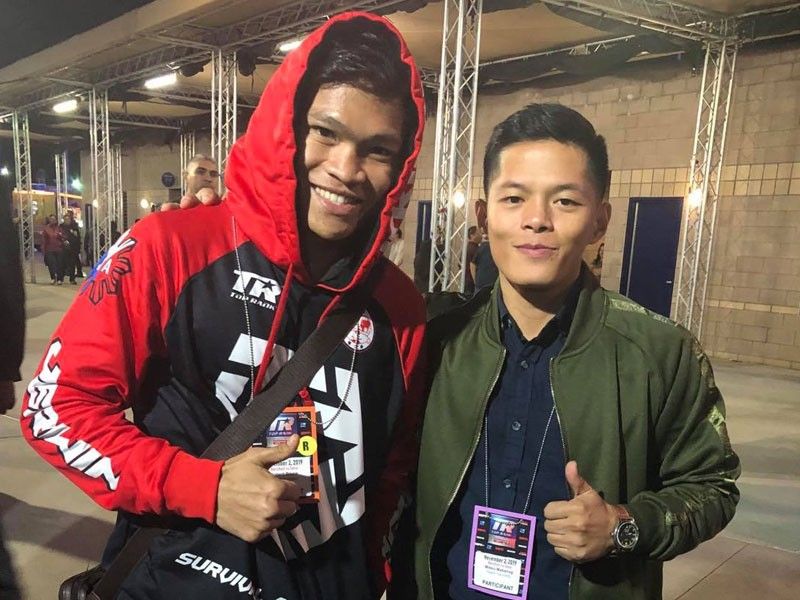 To the UAAP or football community, Mikko Mabanag was representative of Ateneo football during his heyday from 2008-15.

But to schoolmates, he was “Mr. Social Media” as he was always posting pictures, opinions and words of wisdom, or plain old fun.

“I used to post on my social media just for fun and would get teased by my friends,” related Mabanag. “It’s funny because it is now what I do for a living.”

Mabanag has pivoted from football and social media to boxing and social media. He has relocated from Manila to Los Angeles, California, where he works out of Churchill Boxing Club, which is owned by famous American film director Peter Berg (Friday Night Lights, The Kingdom, Patriots Day) and actor Mark Wahlberg (The Perfect Storm, The Departed, Transformers: Age of Extinction and The Last Knight) among others.

“When I came here in January of 2017, the goal was to try and play soccer,” said Mabanag. “I was able to play for the Orange County Soccer Club which is a second tier team in the United Soccer League. I did this for six months then for six months then I went to school in UCLA where I took up Digital Marketing with Web Analytics. It complemented my business background from the Ateneo. It made me understand things better.”

After school, Mabanag, was applying for work and saw this ad for Wild Card West boxing club. At first, Mikko thought it was an extension of the world famous Wild Card Hollywood boxing club of Freddie Roach. It was, except that it was going to separate and rebrand itself as Churchill Boxing.

Mabanag initially thought about not going to the interview but was convinced by the manager, Sam Katkovski.

It’s a good thing Mabanag decided to push through with it because the job has changed his life.

“Churchill gave me hands on experience in boxing and that was priceless,” gushed an elated Mabanag.

“I first did content for Regis Prograis, who had this big fight with (unified super lightweight champion) Josh Taylor. I was working remotely in LA with Melt PR. When the fight ended, there was a good return for investment and the lady with Melt was impressed and she pushed my name in the boxing industry. By working with Melt PR, I was able to see my potential in the marketing industry, that got me working with Ring City USA where I work a social media manager. We’re doing 18 shows next year on NBC Prime Time.”

“Being a former athlete has helped me create a lot of stories about the athletes I work with,” reflected Mabanag. “But of course, my goal is to help the Filipino athletes.”

Things are looking up for Mabanag not only for work, but also in terms of family life. He recently married Macee Reanne Eppard, a commercial dancer.

The plan right now it to build on their dreams before bringing in young ones into the world.

“It’s great. I wanted to have a career in football (Mabanag played in the briefly in the UFL and was included in the first ever Clear Dream Match as an outstanding collegiate player), but life showed me something else. I cannot complain.”