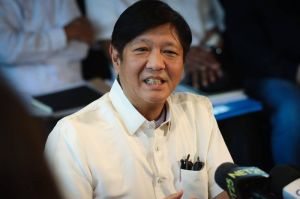 FERDINAND “Bongbong” Marcos Jr. has reached the end of a decades-long campaign to rehabilitate the family brand: the presidency.

Marcos Jr., known by his nickname “Bongbong,” will succeed Rodrigo Duterte in the top job on Thursday, June 30, after his landslide victory in last month's elections.

His win followed relentless whitewashing of the family's past and leveraging of alliances with rival families that control large swathes of the country.

In the 36 years since a popular uprising toppled his father and namesake former president Ferdinand E. Marcos Sr., and chased the family into US exile, the Marcoses have been rebuilding their political fortunes.

Despite his own father's concerns about his “carefree and lazy” nature, Marcos Jr., 64, made it to the ultimate post.

After narrowly losing the vice presidential race to Maria Leonor “Leni” Robredo in the 2016 election, he was determined their rematch in the presidential contest on May 9 would end differently.

Vowing to unify the country, Marcos Jr. made sweeping promises on the campaign trail to boost jobs and tackle rising prices in the lower-middle-income country.

Marcos Jr. said last month he was “humbled” by his success at the ballot box and vowed to “always strive to perfection.”

Growing up in the presidential palace in Manila, Marcos Jr. wanted to be an astronaut before he followed his father's footsteps into politics.

He served as vice governor and twice as governor of the family's northern stronghold of Ilocos Norte province, and also had stints in the House of Representatives and the Senate.

His 92-year-old mother, Imelda, said she had dreamed of him becoming the country's leader.

Marcos Jr.'s links to his father, whose rule was marked by the bloody repression of the martial law years, have made him one of the nation's most polarizing politicians.

He has benefited from a deluge of misinformation on social media targeting a largely young electorate with no memory of the corruption, killings and other abuses committed during the elder Marcos' 20-year rule.

His campaign was bolstered by teaming up with Sara Duterte-Carpio — who won even more votes than Marcos to easily secure the vice presidency — as well as the backing of other political elites.

Marcos Jr. was at boarding school in Britain in 1972 when his father declared martial law, unleashing large-scale corruption and a bloody crackdown on dissent.

He has defended his father's rule by citing the initial surge of economic growth and government spending under martial law, which he said was necessary to save the country from communist and Muslim insurgencies.

While he describes his father as a “political genius,” Marcos Jr. has distanced himself from the charges of pillaging state coffers and economic mismanagement that later impoverished the nation.

“To the world, he says: Judge me not by my ancestors, but by my actions,” Victor “Vic” Rodriguez, a close aide, said in a statement after Marcos Jr. claimed victory.

After the fallen dictator's death in Hawaii in 1989, the Marcoses returned home and began their remarkable revival, getting elected to a succession of higher positions.

The family's turnaround has been aided by public disenchantment over an enduring gulf between rich and poor, and graft allegations that marred post-Marcos administrations.

Seeking to avoid a repeat of the 2016 campaign when he was hounded by questions about his family's past, Marcos Jr. this time snubbed debates with rivals and gave few interviews.