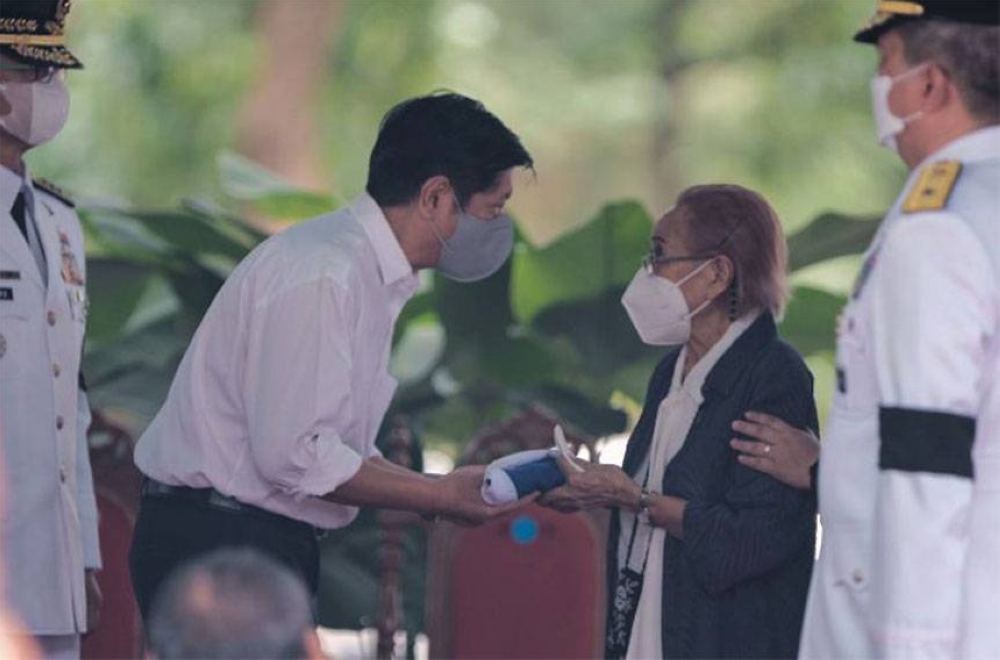 THE 12th president of the Republic of the Philippines, Fidel V. Ramos, or FVR as he was popularly called, was laid to rest on Tuesday at the Libingan ng mga Bayani (Heroes Cemetery) in Taguig City after a state funeral that was accorded a country's leader for the first time in 25 years.

Pope Francis extended his condolences to Filipinos on the passing of Ramos, the first and only Protestant elected president of the majority Roman Catholic Philippines.

He paid tribute to the legacy of Ramos as leader of the country.

“Mindful of the late president's years of service to the nation and his efforts in fostering the values of democracy, peace and the rule of I commend his soul to the mercy of Almighty God,” the Pope said.

He also offered his prayers to the family of the departed president.

“Upon President Ramos' family and all who mourn his passing, I invoke the divine blessings of consolation and peace,” Francis said.

Ramos' remains were interred at Section A of the cemetery where presidents are laid to rest.

Full military honors were given upon the arrival of his remains at the Libingan ng Mga Bayani, followed by a funeral procession to the gravesite.

Prior to the interment of the former president's cremated remains, a funeral Mass was held at the Heritage Chapel in Taguig City.

From the arrival at the Libingan ng mga Bayani, the Armed Force of the Philippines (AFP) occasionally played the “Nearer My God To Thee” until Ramos was laid to rest in a 100-meter plot located beside that of the country's sixth president, Elpidio Quirino.

Upon his family's request, Ramos' urn was placed inside a casket by his grandson CJ Sembrano.

The casket was draped with the Philippine flag.

Before Ramos' inurnment, the trifold flag was presented to his wife, former first lady Amelita “Ming” Ramos, by President Marcos.

Earlier, the President described Ramos as a “symbol of stability,” as he acknowledged his contributions to the country during his administration.

The Chief Executive has declared July 31 to Aug. 9, 2022 as national days of mourning for Ramos.

According to the Presidential Museum and Library, the last state funeral for a Philippine president was held for Diosdado Macapagal in 1997.

Former presidents Corazon Aquino and her son Benigno “Noynoy” Aquino 3rd were the two other leaders who recently died, but their family declined Malacañang's offer to give them a state funeral in 2009 and 2021, respectively.

He was named as Military Hero of the Peaceful People Revolution for his paramount role in returning democracy to the Philippines.

Ramos briefly served as a special envoy to China during the first year of the Duterte administration in 2016.

Mrs. Ramos was a picture of composure and strength as she thanked those who stood by her and their whole family during the passing of her husband.

“Maraming salamat sa inyong lahat, sa tulong ninyo (Thank you to all of you, for your help),” the widow, fighting back tears, said after the state funeral and honors accorded the former leader.

With President Marcos standing beside her, she then shared how throughout their married life, it was not easy as Ramos spent more time away fulfilling his duties as a military man than with their own family.

FVR also served as a volunteer during the Korean and Vietnam wars.

“Alam n'yo, mahirap ang buhay sa military pero kinaya namin (You know, life in the military was hard, but we pulled through),” she stated, recalling how with determination and teamwork, they were able to raise their five daughters, eight grandsons and five granddaughters.

The Ramos matriarch then encouraged Filipinos to emulate her late husband's “Kaya natin 'to” (We can do this) mentality, especially during times they and the country encounter difficulties.

The former leader earned the moniker “Steady Eddie” for being the face of calm and voice of reason even when his administration was faced with the toughest battles such as the Asian financial and local power crises.

The National Council of Churches in the Philippines also paid tribute to Ramos, who it recognized as a pillar of peace-building, and joined the entire nation in mourning his death.

“We extend our utmost and heartfelt condolences to his bereaved family and we honor his life, especially his legacy for peace,” said the statement of the 10-member and nine associate-member group of Protestant and non-Roman Catholic Churches denominations.

Ramos was a devoted member of the United Church of Christ in the Philippines, another ecumenical Protestant denomination.

Pangasinan Fourth District Rep. Christopher de Venecia said Ramos was the right president at the right time as the De Venecia family sent its condolences to the former first lady.

“The De Venecia and Ramos families have been the closest of friends and political allies because of our shared love for the Philippines and Pangasinan province. Speaker [Jose] de Venecia and my mom, former congresswoman Gina de Venecia, were full comrades-in-arms of President Ramos in firmly establishing economic reforms and local government progress,” he added.

During his administration, de Venecia said, Ramos was the driving force behind the implementation of the Local Government Code of 1991.

“Our country and Pangasinan would not be as progressive as it is now were it not for President Ramos and his administration,” he added.

The agricultural damage wrought by super typhoon Karding has reached P1.29 billion, according to the …