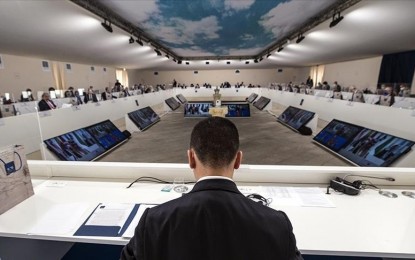 NAPLES, Italy – A meeting of the environment and energy ministers of the Group of 20 rich nations began Thursday in Naples hosted by Italy, the rotating president of the G20.
The ministers, along with representatives of relevant organizations, met at the historic Royal Palace of Naples to hold discussions and seek solutions on the issues of biodiversity loss and pollution, degradation of agricultural land, desertification, and unsustainable use of water and other natural resources.
Italy’s Ecological Transition Minister Roberto Cingolani welcomed the ministers.
The summit is being held in unprecedented circumstances that require heartfelt, joint and urgent global action, he said in his opening speech.
Noting it is impossible to ignore scientific reports on climate change indicators, he said the tragic weather events the world has witnessed in recent months and days show the climate system is experiencing serious problems.
Cingolani said the same applies to ecosystems and biodiversity.
He said the coronavirus disease 2019 (Covid-19) pandemic is also disrupting societies and economies, adding they must fight together against these two tests, both the impact from the outbreak and the climate crisis.
At the two-day summit, participants will evaluate international developments and discuss sustainable policies on nature conservation.
Speaking at the first session, Turkey’s Environment and Urbanization Minister Murat Kurum said Turkey continues its fight against climate change resolutely, but a country cannot continue this struggle alone.
“Climate change and pollution know no borders. So we have to act collectively in the fight against climate change and environmental problems,” Kurum said.
“As Turkey, we conduct scientific research to protect our biological diversity. By increasing our protected areas’ size to 11 percent, we saved all our living and non-living assets and rivers from the danger of pollution and extinction. We continue our work to increase this above 17 percent, which is the average rate in Organization for Economic Cooperation and Development (OECD) countries,” he said.
Kurum underlined that in the coming period, Turkey will host the 16th Conference of the Parties to the UN Convention on Biological Diversity and will assume the presidency of the conference for two years.
“In this process, Turkey will play a leading role in the steps to be taken towards the protection and sustainable use of biological diversity,” he added.
Kurum was expected to make another speech later in the day at the session on “Joint Efforts for Sustainable and Cyclical Resource Utilization.”
The G20 ministers will also meet in Naples on Friday on fighting climate change, developing a common vision in energy, and strengthening areas of cooperation.
Kurum will attend both meetings with a technical delegation consisting of the relevant ministries.
Protests
Due to the G20 meeting, security measures were increased in Naples and about 2,200 security guards were deployed.
Some environmental groups were expected to hold protests at different points throughout the day in the city.
In the morning, a group of environmental activists blocked an intersection on the A3 highway in the east of the city to traffic, Italian media reported.
The protesters argued that the G20 is acting “hypocritically” on the issue of the environment and only protects the interests of multinationals. (Anadolu)

Water in 2 Luzon dams may be sufficient by end-October

Over 200K doses of Covid vax to arrive in Iloilo Province