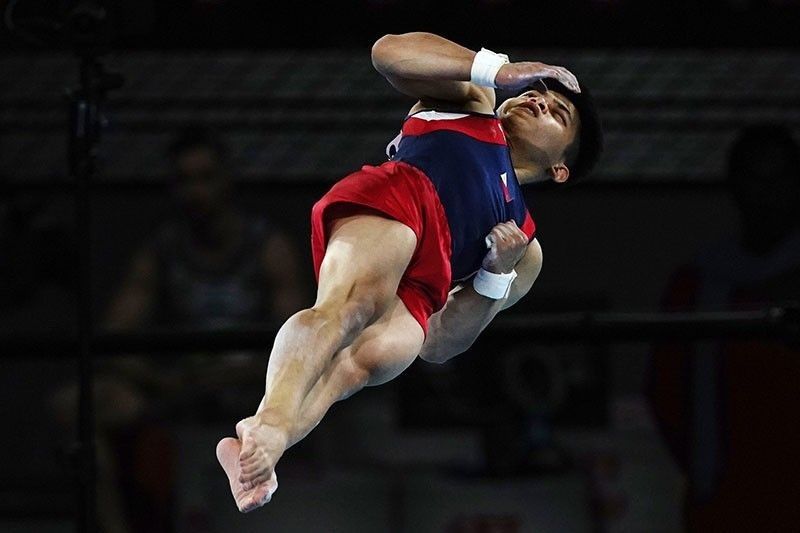 MANILA, Philippines (The Filipino Connection) – Reigning world floor exercises champion Carlos Edriel Yulo tries to do the improbable in a fixture Olympic sport: win a gold medal for a country that’s outside of the usual gymnastics powers.

That mission rests on Yulo’s efforts to execute the most difficult or never-before-seen routines in the floor exercises (FX).

Yulo is tipped by the Gymnastics Association of the Philippines to win the event. The confidence on Yulo comes from his surprise FX gold medal finish at the 2019 World Artistic Gymnastics Championships in Stuttgart, Germany.

His 15.300 score in the finals helped Yulo upset favored world champions like Nikita Nagornyy and Artem Dolgopyat of Russia and Xiao Ruoteng of China. (Yulo ranked seventh in the qualification round to make it to the eight-man final round.)

During the Stuttgart final, Yulo started off with a full-twisting double straight plus a full twist, then followed by a high double pike. His third pass saw him make a double twist with a hop and another quick twist. Yulo then made one full twisting and one double-twisting front on his fifth pass and finished off his routine with a triple twist towards his right side.

The 20-year-old’s mission in Tokyo is to perform one of the most difficult FX routines: the triple back pike somersault. This routine sees the gymnast stretching the legs straight while holding the hip area, somersaulting thrice in that position, and landing nicely on the floor.

But that routine is now called “The Nagornyy” because Russian Nikita Nagornyy executed the first triple back pike somersault at last April’s European Championships in Basel, Switzerland. Nagornyy performed that feat during the men’s all-around competition.

In gymnastics’ Code of Points, a difficult routine is named after the person who first executed it at a major competition. (The “Nagornyy” is EG III # 24 in the Code of Points.)

Nagornyy’s triple back pike though incurred a 0.1-point deduction because he landed outside of the floor exercise area. He scored 15.066.

Foes on the ‘floor’

All eyes of gymnastics analysts are on the all-around competition, especially on the reigning world all-around champion Nagornyy who reportedly improved further at the 2021 European Championships.

Expected to crowd Nagornyy for the all-around title are his compatriot Artur Dalaloyan (trying to recover from a torn Achilles tendon), Chinese Xiao Ruoteng and Japan’s. Yulo also competes in the men’s all- around (which includes routines in the FX, pommel horse, still rings, vault, parallel bars and the horizontal bar).

Nagornyy, Dalaloyan and Ruoteng are the 2019, 2018 and 2017 world all-around events champions, respectively. Dalaloyan won the floor exercises at the 2018 world championships while Dolgopyat won FX silvers in both 2017 and 2019.

Yulo beat all four of them at the Stuttgart world championships.

Interestingly, the one who first performed the triple back pike somersault, Nagornyy, hasn’t won a floor exercise medal at the annual world championships.

Yulo’s score in his FX routine during the qualification rounds must land in the top eight so that he enters the finals for the said apparatus this August 1.

The Filipino Connection is a regional partner of Philstar.com.