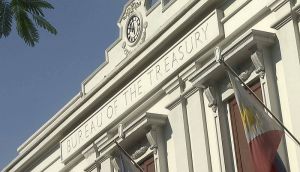 Bureau of the Treasury

(UPDATE) THE government's outstanding debt dropped by P267.41 billion to P12.50 trillion at the end of May, the Bureau of the Treasury (BTr) reported on Friday.

The bureau attributed the decline to the payback of provisional advances from the Bangko Sentral ng Pilipinas (BSP).

Domestic obligations accounted for 69.3 percent of the total debt.

Local debt was down by 3 percent, to P8.66 trillion from P8.93 trillion, at the end of April, the BTr said, due to the “P300.00 billion repayment to the BSP which was partially tempered by the net issuance of government securities.”

The bureau also reported that the country's external debt was up by 0.1 percent, to P3.83 trillion from P3.82 trillion, as a result of “the impact of local and foreign currency fluctuations against the USD (United States dollar) amounting to an additional P5.63 billion and P9.41 billion, respectively.”

It benefited from the results of the P12.05-billion net repayment of external debt.

Total outstanding debt was P11.07 trillion in May last year, with P7.91 trillion coming from domestic borrowing and P3.15 trillion from foreign source1s.

With P8.2 billion in domestic borrowings and P3.56 billion in foreign loans, total debt reached P11.73 trillion by the end of 2021.

Meanwhile, at the end of May, government-guaranteed debt increased by 3.3 percent to P399.71 billion on the net repayment of both internal and external guarantees, which totaled P8.41 billion and P6.48 billion, respectively.

The outstanding debt is expected to hit P13.41 trillion this year, P4.40 trillion of which are domestic obligations and P4.01 trillion from overseas liabilities.

House Speaker Martin Romualdez couldn’t help but give due props to his nephew, Ilocos Norte …