MANILA – An official of the Department of Science and Technology (DOST) on Thursday reported the national government is in “advance talks” with local pharmaceutical companies to sustain the government’s needs for the National Immunization Program.

In an online media briefing, DOST Undersecretary Rowena Cristina Guevara said the country needs a local vaccine manufacturing facility to provide adequate vaccine doses to the potential annual Covid-19 vaccination and to be prepared in time for the next pandemic.

“Currently, the government is in discussion with numerous local pharmaceutical companies that have expressed their intent to establish a local vaccine manufacturing facility in the country. I’m going to cite six companies that are in advanced talks with the government,” Guevara said. 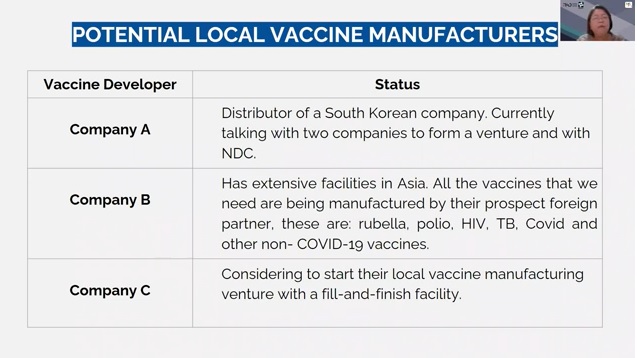 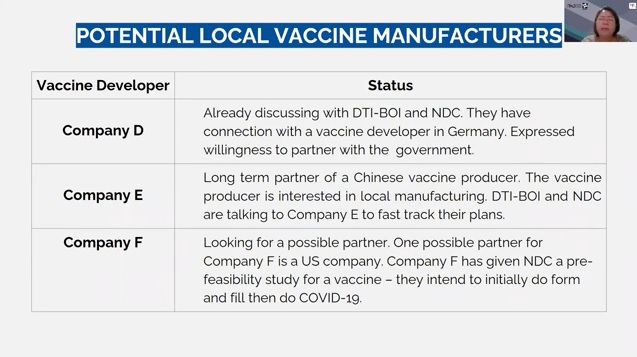 She noted the length of time it takes for a vaccine facility to be put up depends on its type.

“Kung fill and finish, ito yung darating yung bulk antigen sa atin tapos ilalagay ng manufacturer sa vaccine ampules o vials o injectables. Yung ganun kaya yun matapos in less than two years kasi nakakabili ngayon ng facility na buo na eh, idedeliver na lang sa iyo yun (If fill and finish, this is bulk antigen that will arrive and the manufacturer will place it in vaccine ampules, vials or injectables. That can be completed in less than two years because the complete facility can be purchased, it will be delivered to you),” she said.

She said another type involves the whole process of manufacturing vaccines including the production of bulk antigens.

“It will take, the minimum, if you have a big company that has a foreign partner that is already doing advance manufacturing, they can do it as short as three years,” she added.

President Rodrigo Duterte on March 29 emphasized the need for the country to establish its own vaccine development facility as an investment for the future generation during a meeting on Covid-19 concerns.

On April 6, the secretaries of the DOST, Department of Trade and Industry, Department of Budget and Management, Department of Health, and vaccine czar Carlito Galvez Jr. discussed the plans on vaccine development facility in response to Duterte’s directive.

The highlights of the meeting included the recommendation to support the certification of the bill creating the Virology Science and Technology Institute of the Philippines as priority; accelerated arrangements for local pharmaceutical companies and public-private partnership to undertake vaccine manufacturing; and policy for government procurement to catalyze local vaccine manufacturing. (PNA)

Over half of large firms maintain, hike employment amid pandemic

'Be inspired' by Petito, father says at slain traveler's funeral

'Swift chariots of democracy': all aboard Washington's secret subway

Frequented by presidents, Supreme Court justices and even the occasional movie star, it is the …