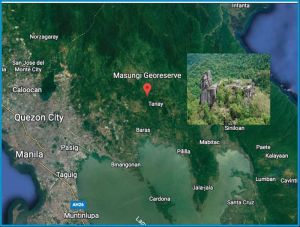 FOR nearly three weeks, an armed invasion of land belonging to the Republic of the Philippines has been ongoing, and the government has done virtually nothing to stop it. This is an utterly shameful abrogation of responsibility to the people on the part of the agencies concerned — the Department of Environment and Natural Resource1s (DENR) and the Philippine National Police (PNP) in this case — right up to and including the Office of the President, which has so far ignored calls to intervene to put a stop to the act of brazen criminality.

On September 3, the first reports were received from stewards of the Masungi Georeserve about the arrival of a large group (about 30) of armed men in the area. The group established an encampment along Kilometer 48 of the Maharlika-Infanta Highway on the periphery of the georeserve. The members of the group — which for the sake of comparison is about the size of a standard infantry platoon — refused to identify themselves or explain their purpose, and threatened anyone attempting to document their presence in the area; unsuccessfully, as it turned out, as extensive video footage and photos of the incident were swiftly shared to social media and relevant government agencies by the Masungi Foundation and others.

It was soon established that the armed band are purportedly employees of a certain Sinagtala Security Services Inc., and were dispatched to the area by one Biatriz Sonquipal to enforce a land claim by that individual over part of the property of the georeserve. As of this writing, neither the armed group nor anyone has been able to provide documentation lending any credence whatsoever to the supposed land claim, and “Biatriz Sonquipal,” if that is indeed a real person, has not surfaced to provide an explanation.

As of September 21, the group is still at the location, with the only actions being taken so far having been a vague statement from the DENR that it is investigating the incident, and a visit from PNP officers over the weekend that resulted in the seizure of some unregistered firearms, but no arrests. That unsatisfactory action — possession of an unlicensed firearm is illegal, and subject to immediate arrest and charges — along with other puzzling non-responses from the PNP in the area prompted the PNP command to announce that it was investigating whether police officers were involved with the armed group. The results of the inquiry are still pending; otherwise, the PNP has only said that it is “coordinating” with the DENR over the ownership issue.

The Masungi Georeserve comprises about 46,300 hectares of upland, most of it located in Rizal province, with parts extending into Bulacan, Laguna and Quezon. It was created by President Ferdinand E. Marcos with Presidential Proclamation 1636 in 1977, and has been a protected area since 1969, when it was declared part of the Kaliwa Watershed Forest Reserve. Protection of the area was further reinforced by the National Integrated Protected Areas System Act of 1991, which emphasizes that any occupation, construction or business activity on the land is prohibited.

Thus, any “coordination” on the “ownership issue” should be completed in an instant; barring an act of Congress, no one can claim any part of the critical ecological reserve. As soon as the presence of the armed band was reported, the PNP and DENR should have swiftly moved to arrest or otherwise eject them from the area.

And under any circumstances, there should be no instance in which a platoon-sized group of armed men gathering anywhere should be tolerated, unless they are members of the PNP or armed forces on official business.

Environment Secretary-designate Antonia “Toni” Yulo-Loyzaga has not yet been confirmed by the Commission on Appointments. If the lack of concern and unwillingness to take the necessary corrective action in the Masungi incident is an indication of how the DENR might perform under her watch, then her appointment should be firmly rejected. The country needs an environment secretary who will actually defend the environment, not sit on her hands while bandits seize protected lands with impunity.

Whether the DENR or PNP decides to belatedly carry out their duties, or it takes a direct order from the president, this appalling situation needs to end, now.